The feminist antidote to Hamilton

Cast your mind back to GCSE English lessons and you might vaguely remember mentions of a ‘dark lady’ in Shakespeare’s sonnets. Widely represented throughout history as nothing more than Shakespeare’s lover, this lady in question may well have been a real person and a poet in her own right. This stunning production gives voice to a misjudged writer, teacher and poet Emilia Bassano through performance, rap and some iconic monologues.

After a transfer from an 11-day run at the Globe, Emilia takes pride of place in London’s West End. Three actors play Emilia, representing different stages of her life from young girl to battered, old woman. The audience is taken on a journey through her experiences in Elizabethan England as she interacts with various swathes of society attempting to get her talent for words published.

The play is opened by head-strong, determined young Emilia. Saffron Coomber offers a delightful performance from young child to mother, an impressive distance to cover. She is closely followed by Adelle Leonce who has been dealt the greatest challenge, portraying the poet at the beginning of her career, weathered by motherhood but not yet sure of herself. Leonce gives an endearing performance bursting with energy for this mid-run Friday evening. Clare Perkins delivers the final blow in this saga, offering an almighty and empowering performance that truly justifies the relevance of this Shakespearean epic.

The real marvel in this script can be found in its context – the production’s original staging in the Globe has been well transfigured in the Vaudeville Theatre. Actors continually break the fourth wall, climb through audiences and scale the dizzying heights of the dress circle. And with an all-female cast, there is much hilarity to be found in the dramatic gender swap from Shakespeare’s day where only men could perform.

It is evident this play has been written in the hangover of Hamilton; an unjustifiably forgotten figure in history tells their story of injustice and inequality, playing on the natural storytelling qualities of rap and making use of updated language, Emilia is the feminist antidote to its formidable American predecessor. Thankfully director Nicole Charles handles Morgan Lloyd Malcolm's script with care and precision, steering clear of the patriotism that makes Hamilton so emotive. Instead, Charles emphasises universal injustice, as well as layering the production with a disarming sense of humour.

It is this aspect of comedy that leaves the audience vulnerable, laying the necessary groundwork to deliver the impact of the social message that penetrates the production. It is not hard to call out the obtuse sexism of the 1600s, but Malcolm's script cunningly places the obstacles faced by Elizabethan women in a modern context. Double standards, the representation of women, and black women, in particular, are discussed with sincerity.

Emilia highlights the problems of our day by relating them to a not too dissimilar period in history. Ultimately the merciless witch hunts of the 1600s bear a shocking resemblance to trial by social media today. 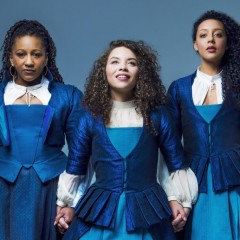 The feminist antidote to Hamilton