My review is for Part B - be the audience of the bronze award.  I went to see Jack and The Beanstalk in pantomime.

Jack and The Beanstalk

Jack and The Beanstalk is a pantomime about a boy called Jack.  His family are poor and they are struggling to pay for the rent on their house.  They have a cow called Daisy who they love but decide they have to sell her to make some money.

Jack is given the job of taking Daisy to the market to sell her.  On the way he meets a man who was in disguise who offers Jack some money for Daisy, this man was the villain of the story.  Jack was so pleased he ran home to his mother.  When he got home they saw that the money was actually beans.  His Mother was angry at Jack and threw the beans out of the window.  The next day there was a huge beanstalk growing from the beans.  It led to the giant.

There were lots of great characters in the pantomime.  Jack had a girlfriend.  There was also two policemen that were really funny and did silly things with the audience.  Jack's Mother was the pantomime Dame and she was great.  Jacks brother was also very silly.

Jack decided to climb the beanstalk to defeat the giant and save his girlfriend who had been taken by the villain in the pantomime.  His brother, the King and Queen and the two policemen also climbed up the beanstalk after Jack.

After searching the castle they found Jacks girlfriend and rescued her.  On the way back to the beanstalk they found a goose that lay golden eggs.  Jack knew this would give them money so took the goose.  They were chased by the villain and the giant, who shouted ‘Fe Fi Fo Fum, I smell the blood of an Englishman’ scaring them all but they managed to get down safely.  The giant was halfway down the beanstalk when Jack chopped at it with an axe.  The  beanstalk and the giant both came crashing to the ground.  Jack had saved the day and his Mother was so proud of him.

Jack went on to marry his girlfriend and everyone sang at the end.

I enjoyed the performance and the characters were great, some better than others.

I did feel that the end dragged on a little too much.

I was able to go backstage afterwards and meet some of the cast which I really enjoyed. 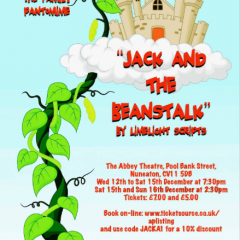 Jack and The Beanstalk - pantomime

My review is for Part B - be the audience of the bronze award.  I went to see Jack and The Beanstalk in pantomime.