Russell meets his aim of providing an antidote to the planned comedy sets of the Fringe. He bravely attempts improvised stand-up in a cool space.

We walk in to a great space - archway shaped, with rows in front of a stage featuring two life sized cardboard cut-outs of Russell. They come in handy later. As he bursts on to the stage some chuckles begin, and that sets the tone for this performance. If there were any back-up plans or pre-prepared gags then you couldn’t tell. The set felt messy throughout and the biggest laughs came when he acknowledged how much of the audience wasn’t laughing generally.

It was perhaps a split audience in this respect, and the lack of any coherent comedy thread, story, or long form gags certainly didn’t impress everyone, and a couple of people walked out part way through. Russell seems a likeable guy, and he certainly weaved in some good gags.  He came across in character as perhaps a younger Owen Wilson, but a little more 18+ rated. Some of the comedy centred on elements of narcissism, misogyny, racism and a few dead celebrities. It wasn’t all carefully or appropriately put, no doubt causing some offence.

Towards the end of the set, the cause of the biggest laughs changed. Rather than amusing us by acknowledging how the set wasn't working, laughter came from the comments and actions of audience members. Maybe it was carefully planned to develop this interactivity and get audience members involved, but given the half finished sentences, the lost looks and the searching for the next thread, I'm not convinced it wasn't just luck.

Perhaps the show will go down better with artists who’ve had to spend many hours (across months usually) planning a show and looking for something of a very different feel.  But unfortunately this can’t be a recommended pick.  Having said this, it’s improvised and new every day - and Russell seems like a chap that can offer a better experience which could be worth a punt - it is free to enter after all. 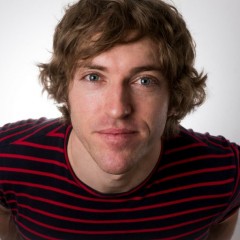 Russell meets his aim of providing an antidote to the planned comedy sets of the Fringe. He bravely attempts improvised stand-up in a cool space.