An entertaining solo show if you’re keen on tape, face paint and cringing at what must be uncomfortable for David. One for the Adults only.

The show opens in a packed out room at the top of the Gilded Balloon Teviot. It starts off with only a smattering of laughter for the first 15 minutes or so - it’s a tough crowd and David acknowledges this. He has an annoying habit of constantly repeating himself with his lines, and it does start to wear thin. He then takes this to another level when he establishes one word and repeats for nearing three minutes straight. This makes some people tickle, the more the absurdity continues. At various points in the show to come I wonder if people are laughing at him more than with him. He says himself “I’m not for everyone” and the show description does say “come witness the nonsense”. This is apt perhaps. But undersells the entertaining value of parts of this show.

David talks about past reviews - polarising star ratings. Right after, he performs a certain adult act to the microphone - I hope he brings his own. I can understand this humour is not for everyone; it’s more of a childish humour and he conducts numerous physical acts and jokes for the laughs. Or put another way, it’s weirdness for laughs.

There’s no thread through the show really, just moving from one thing to the next, although he does segues pretty well. He does touch on a serious issue about weight and he’s proudly lost some ready for the show. This is great, and his body confidence is evident throughout. A positive message for mental health and a refreshingly down to earth brief period amongst the madness including some very humorous live action Hintai (only one person knew - or admitted to knowing - what this was - don’t google it).

As the madness developed I feel the show improved at least in it’s humour, and for his own brand of this comedy it’s certainly relatively good. Some will love it, some will hate it. I can appreciate the effort, daring and ability to brings laughs regardless.

If you are wanting an evening of feeling uncomfortable about what’s happening on stage, but probably laughing at it regardless, then this is one to go to - expect to leave feeling a bit violated and weirded out. But not many shows deliver this effect in a somewhat positive way!

More details and tickets at: https://tickets.edfringe.com/whats-on/david-correos-the-correos-effect 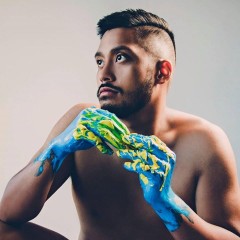 An entertaining solo show if you’re keen on tape, face paint and cringing at what must be uncomfortable for David. One for the Adults only.