This is a skilful team of sketch comedians who hold them together well with a good thread throughout. Characterisation & physicality is strong here.

This show is in one of the larger spaces and they play on a blank stage. Every scene and setting is made using the bodies of the three performers. Of course this helps keep things slick and goes someway to show the skill of the performers, helped in no small part by their tremendous energy from the very first second.

Some of the sketches are a touch gratuitous for our imagination and sensibility, but then you’ve just got to think a bit more extreme. Something I quite like is that the sketches aren’t all about humour - they even reference “Sketch Drama” earlier on. So where a sketch may not be instantly comical, the acting ability comes through, and often you’ll find a good laugh by the end - directly at the physicality, the story or the character; and sometimes at the absurdity where the only response you can have is to laugh.

The show is a collection of sketches charting their individual world tours. I won’t give away the tremendous stories, but this approach gives great licence for a range of situations influenced by stereotypes and cultures across the world. It keeps each sketch fresh and ensures an enjoyable hour. They also threw in some really good sung comedy - not something I was expecting from the show. They have good skills in all facets of performance and by the end of the show you feel like you’ve seen them grow together as a trio.

In short, they inspire your imagination very well, take you on an interesting journey around the world, and leave the stage at the end to well deserved raucous applause. 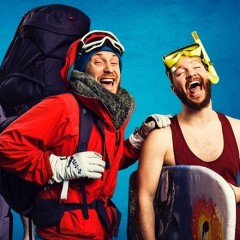 This is a skilful team of sketch comedians who hold them together well with a good thread throughout. Characterisation & physicality is strong here.