Exploring the impact of technology through humour, observations and cracking use of a Commodore 64. An insightful hour that demonstrates the chaos of our world caused by the evolution of technology.

A computer screen, a table with an iPad. You walk in to the room and should be able to have a good guess on the theme of the show even if you haven’t read the blurb! A simple set-up but positioned well to make the performance space feel just right in size.  These aren’t typical set-pieces, but they’re key to the smooth delivery of a great show.

This show was funny from the start.  The other audience members were laughing too, and it was a team spirit in an intimate performance. Yianni weaves his way through the evolution of technology and how the human factors have impacted this. Our own pre-disposition to making our lives easier, are perhaps having the opposite affect at times. Maybe they're making new issues for us to deal with, from fake news and personalised advertising to robots that are taking over our jobs.  He makes the excellent point too that AI (Artificial Intelligence) means it’s thought process jobs going as well as the labour jobs usurped on by automation.

He draws comparisons between the analogue world and digital world with great flair, good timing and a personable relevance that means you can relate regardless of which generation you’ve grown up as. He also makes the shocking statement that smart phones are like babies. Want to know why? You’ll need to watch the show.

You might also leave worried - realising that the current misuse of technology and data is a catastrophic occurrence perpetrated by the ‘evil’ in the world too. But who is evil? And who’s to determine the definition? Just a reminder - "To be human is to be flawed".

There’s a bit more that can be done to tie the elements of the show all together well. The use of the projection screen seems inconsistent in his points and there’s a few times you miss what could have been a helpful visual aid, and other times where it’s used plenty.  Perhaps too this is a show that will work best with a large audience - the generalisations and percentage humour will work with more of a live sample.

Overall though this is a show that is well executed, makes you laugh throughout, and humorously tackles real issues facing the world today that many still shy away from. You might learn something, and you’ll almost certainly laugh, so give this a go!

More details and tickets at:  https://tickets.edfringe.com/whats-on/yianni-agisilaou-i-human 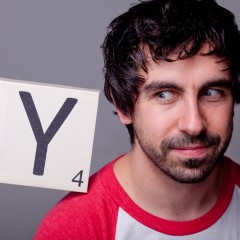 Exploring the impact of technology through humour, observations and cracking use of a Commodore 64. An insightful hour that demonstrates the chaos of our world caused by the evolution of technology.