50 Magic Tricks in an hour is no mean feat. Ben Hamlin brings some classics, some new interpretations, and a relaxed but very energetic approach to magic performance.

Racking up the points for each trick he completes, the 50 takes a game show format. Ben has a huge amount of energy, and a stage littered intriguingly with all sorts of items that end up being a part of his trickery. He's also warmly supported by an assistant and a techie with a live camera feed for broadcasting the usually close up tricks. Ben is joined on stage by a large number of audience members throughout and he engages with us very well - which is no mean feat for a large fringe venue.

This interactivity and personable approach really opens up access to magic. He uses music well to underscore everything, gaming sound effects for that little extra touch, and even some pre-recorded items to support the show. He also throws in a bit of impression / mime of some magic stars to add that little more flavour.

There’s a mix of card tricks, physical stunts and good live illusions. The best word to describe all of this is ‘paced’ - you certainly won’t get bored and everyone brings a will for him to get through enough tricks. Some didn’t go so smooth, but he dealt with any fallout or set-backs very well. After all we’re only human, and it can be great to see the rare slip up. Sometimes you think you spot a slip-up and that seems just more misdirection to trick you further.

There’s a good arc to the show. It almost feels as though the tricks are being decided one at a time and this informality bodes well (I’m sure it’s all carefully scripted in reality). However, I think good is about as much as we can give.  It’s an enjoyable hour, especially if you are with a bunch of friends, but it's maybe not something for the experienced magic show goers out there.

Well staged, well paced, well executed (mostly) and well done to Ben for creating a new format for a magic show that entertains.

More details and tickets at: https://tickets.edfringe.com/whats-on/ben-hanlin-50 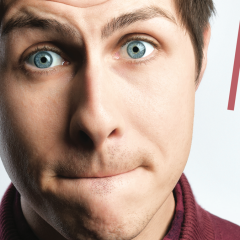 50 Magic Tricks in an hour is no mean feat. Ben Hamlin brings some classics, some new interpretations, and a relaxed but very energetic approach to magic performance.