A promising show with good actors, an enjoyable premise and very much a crowd pleaser.

The great thing about improv is that it’s different every day. I enjoyed the show as did many of the 300+ audience with me, some of whom got to contribute parameters for the performance. The setting is good with a large, very good looking set. The lighting set-up played very well, and the performers and technician responded to the evolving storyline to great effect. They made good use of the posh English country house set, consisting mostly of furniture, whilst performing in Africa on a game reserve...

However, I’ve done improv before, and a simple rule is not to block another actor.  I felt that there was some blocking going on, and at the very least there were some challenges being set. These challenges sometimes proved hard to overcome, focus was lost, and the quality of continuity and logic in the storyline was compromised. This generally added to the humour - and the audience was very much invested in supporting the actors; perhaps thanks to the real connection created by Caitlin Campbell as the detective and ‘convenor’ of this particular show’s troupe.

Mistaking the facts of the case, or premise of the show, to be corrected by other performers was humorous but did drag the show a bit at times.  This was a shame because it was otherwise a good quality show and the performers added some real sprinkles of imagination.  They played on some 12A rated sexual deviance which worked pretty well and throughout the show you could see the troupe enjoying themselves and clearly working hard to string the story together.

Again, the detective / convenor held the show together at points and allowed the odd breather for the performers whilst she set a direction of travel. The show is a great one to see for a light start to an evening of theatre, many murmurs are of how good it is, and you will always get to see a show made just for you that day. 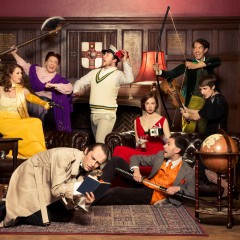 A promising show with good actors, an enjoyable premise and very much a crowd pleaser.