Being part of the audience at the Corn Exchange in Cambridge always fills me with excitement. This time I found myself waiting for the start of Nigel Kennedy’s concert. As there was a significant delay due to heavy traffic, the atmosphere in the auditorium grew slightly tired and sleepy. It was Wednesday 16th May 2018. Bach was about to meet Kennedy and Kennedy was about to meet Gershwin.

Nigel Kennedy, a well-respected violinist, is famous for his unique way of playing classical pieces of music in the contemporary style to reach out to the wider audience – the people who are around now. As he once said in an interview “If you get in there (into the piece) mentally and really relate to it, you’re gonna come up with something which would not’ve been found by the original composer but, at the same time, give it a bit of fresh life with your fingerprint.”

Coming on the stage, I thought at first, Nigel Kennedy didn’t want to waste more time on changing and decided to perform in his travel clothes. Later on, I realised that this was on purpose. Nigel and his accompanying musicians invited their close friends – the audience – to their ‘living room’. The guest Nigel Kennedy turned into a warm host. The concert quickly picked up the pace. I didn’t mind the delay.

J. S. Bach’s Sonata No.1 in G minor played on the electric violin sounded surprisingly very different from what I would have expected. The sound seemed coldly metallic and missing the richness of colour. I felt let down slightly. I wished Nigel had played the Sonata on the baroque violin. On the other hand, he played with effortless ease, fiery passion and impeccable timing. I found that really inspiring. Watching Kennedy perform made me question my right hand bowing skills and my top speed I can play in while still maintaining the clarity of the sound and correct timing. I was impressed by the slick smoothness of the music flowing from one style to the other.

The second part of the concert was focused on Nigel Kennedy’s own compositions. Opened with “The Magician of Lublin”, this piece brought a wide range of different rhythms mostly inspired by Klezmer -Jewish music. It told a story of people in Lublin, Jewish community living in Shtetls. This was the part of the concert where I could use my imagination and let it flow. I enjoyed the vivid colours of Kennedy’s pieces and the way it painted the pictures in my mind.

To conclude the concert evening, Nigel shared his favourite jazz pieces by George and Ira Gershwin.

This concert has inspired me to follow in Kennedy’s footsteps and his way of playing with love for the audience.

I thought this concert was more than a heart-warming event. It helped me understand Kennedy’s passion for music whatever style – classical, jazz, rock, klezmer...Listening to the pieces I had also played myself, I felt recharged with the vibrating energy and depth of the dynamics.

I learnt that it is important to be able to play a piece of music in the style it was composed at but that it is also important to listen to the music with curiosity and an open mind; to try and explore what the music unfolds to you.

Listening to Nigel Kennedy, I felt I wanted to learn more about him and his life philosophy. I liked the way he talked about music and his way of understanding it –  the way I could understand it too.

This was one of the special concerts I have ever been to. Nigel Kennedy played all the pieces like a violin master and the way he presented them made it accessible to everyone.

I would highly recommend this concert to anybody interested in violin music of any genre. 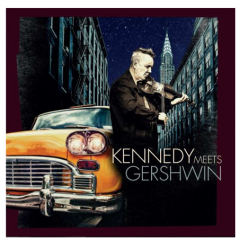 Being part of the audience at the Corn Exchange in Cambridge always fills me with excitement. This time I found myself waiting for the start of Nigel Kennedy’s concert. As there was a significant delay due to heavy traffic, the atmosphere in the auditorium grew slightly tired and sleepy. It was Wednesday 16th May 2018. Bach was about to meet Kennedy and Kennedy was about to meet Gershwin.