On Monday the 14th of May I went to see Our Country's Good at the Crucible Theatre in Sheffield which lasted around 2 hours 50 minutes. It was written by Timberlake Wertenbaker in cooperation with Ramps On The Moon.

This play was originally written by playwright Timberlake Wertenbaker in 1988 and is based off the Thomas Keneally novel The Playmaker.

This play is set in early colonised Australia just after the American War of Independence. In the play we see one British soldier tasked with directing the convicts, who had been brought to colonise the country, in Australia's first piece of theatre: The Recruiting Officer by George Farquhar. However, they are struggling against the odds with the opposition from the officers in the colony and the threat of the leading lady being hung. This play is a distraction for the prisoners, letting them forget about their imprisonment and allowing themselves to escape into the magic of theatre.

The thing that makes this play stand out is that most of the cast had disabilities. Many of them were deaf and the show was made inclusive by a lot of the play being signed. The way they did this though was interesting in itself. For example, if a hearing actor and a deaf actor were having a conversation, instead of just translating what the other character was saying for the audience, be it signed or spoken, they performed a reaction to it. An example of this would be if speaking person said: "I'm going to get some bread," the other would sign "I don't care that you're getting bread but...". This provided the play with more fluency and authenticity than just having a translator on the stage with them. At some points they did use translators but these were actors already on stage. The actor would stand beside the person they were speaking for and put on a different accent to the one that their character has. This was interesting to watch and I think that it was a good way of letting both deaf and hearing people watch and fully understand the play.

The set was quite complicated and consisted of a sandy floor and wooden planks to create the space where most of the acting happened. A wooden stage, made of the planks, was built up slowly over time to represent how the colony slowly developed and grew over time. I really liked this way of showing time passing. There was also a sheet of material which lowered down to show that the characters had moved inside. However, the staging wasn't very good and made it hard to see everything that was happening on stage. The play was obviously devised for an proscenium (end-on) stage rather than the thrust stage of the Crucible theatre, meaning that much of the action was hidden behind other actors.

The actors were all very good with no one particularly standing out. One scene I particularly enjoyed involved the main female convict learning her lines for the play. Another convict on stage, who had a minor part in the play, was obsessed with words as he had been brought up with just a dictionary. He was talking about how different words were important in different ways. For example how one 'L' makes a word good, like love, but two 'L's makes a word bad, like lonely. The examples that he used were very symbolic as it revealed that he was in love with the woman. The way he spoke about loneliness said a lot about how the convicts felt about not having their families with them on this strange new island, which they were taken to against their will.

I would really recommend this play to everyone of all ages. The plot was interesting and didn't get really get boring very often. I enjoyed watching it and I love the fact that you can enjoy it even if you're deaf. 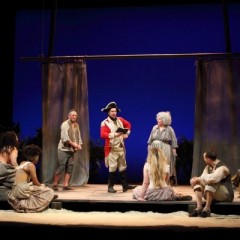 On Monday the 14th of May I went to see Our Country's Good at the Crucible Theatre in Sheffield which lasted around 2 hours 50 minutes. It was written by Timberlake Wertenbaker in cooperation with Ramps On The Moon.