On Wednesday 28th March I went to see the York Realist at the Crucible Theatre in Sheffield. The show was around 1 hour 30 minutes with an interval half way through.

In this play we see George, a farmer in Yorkshire, who has been suggested by a friend to act in the York Mystery Plays. However, due to commitments with looking after his family farm and his elderly mother, he is unable to find time to fit in rehearsals. When assistant director John comes to George’s cottage to convince him to go to rehearsals, the two men start to fall in love. As it is 1960's Yorkshire, the two can’t tell people about their relationship as homosexuality was only made legal in the UK in 1967, so we see the two try to keep their relationship a secret. However, this causes stress in both of them and the pair’s strong personalities start to get in the way, with the hard George who doesn’t let his feelings out; and John who wants to make George more open and is always worried about the illegalities of their love.

The cast was very small with only 7 actors, however they were very accomplished actors with history in major TV series such as Doctor Who and Call the Midwife as well as well accomplished films like Captain America and Ghostbusters. The cast didn’t have to be big though as the play just focused around one family and their cottage.

The play was performed on the Crucible main stage but the set was raised and smaller than usual. The stage was set out as George’s cottage and stayed that way throughout without changing the layout much at all. I think that this decision to make the stage smaller was very effective as it made the house seem more cosy and made the characters seem closer to each other, very reminiscent of small villages in the countryside where everyone seems to know and be friends with each other.

Lighting was used very well throughout the performance with it mostly being turned on and off at the push of the light switch on one of the walls. Also, a more soft, orange light was used to show early morning later in the show. The set had running water which was something I hadn’t seen before in a play which came from taps in the kitchen.

The layout was quite unusual in the way that at the start of the play we saw George and John interacting as if they’d known each other for a long time. As John excused himself and went to his car, the scene changed feel with George’s mother walking in even though we had just been told that she’d died. This was a very clever way of doing a flashback as at the end of the show, we picked up where the first scene had left off with John coming in from his car. Although at first it was tricky to pick up on the fact that time had gone backwards, I liked the idea of having a really subtle flashback.

Two scenes that stood out for me were both between the two main characters John and George. In the first one, John went into a monologue about all of the things that he loved about the countryside after staying for a couple of nights, only to say that he couldn’t stay because he had to go back to London. Later on, after George had visited John’s home in London and had returned to his cottage, he did the same but with everything he loved about London, only to again say that he had to stay in Yorkshire to look after his mother and his farm. I think this really showed how similar the two characters were and made the audience feel as though they should be together.

In conclusion, I really enjoyed this play and would definitely recommend it to anybody. It was full of jokes within the family interacting that made the whole audience burst out in laughter at how authentically Yorkshire the whole thing was. A lot of the family interaction was very akin to how we all see Yorkshire families and the whole thing was a lot of fun. I won’t ruin the ending but it is a real plot twist and leaves the audience hungry for more. I loved it! 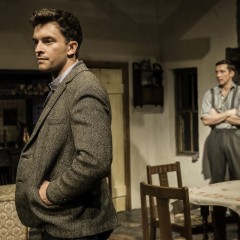 On Wednesday 28th March I went to see the York Realist at the Crucible Theatre in Sheffield. The show was around 1 hour 30 minutes with an interval half way through.