Root Branch Theatre Company delivers a bizarre and passionate retelling of Norse myths, which manages to lose its audience to a convoluted structure.

Norse mythology may be considered a frequently ignored part of Britain’s cultural foundations. However, the Root Branch Theatre Company sets out to explore our Pagan traditions and the rich culture attached to Norse mythology at Brighton Fringe festival with an amalgamation of legend, ballad song, chant and poetry. Led by performer Alison Williams-Bailey, this one-woman experience depicts the story of creation; both in the realm of the deities and mortals.

Initially gathering within the cosy confined spaces of the Junkyard Dog Café, the audience was directed towards a makeshift, back garden theatre with significantly limited space. With the storyteller and audience in such close quarters, there was a huge opportunity to establish an atmosphere of wonder and spirituality that unfortunately went unexplored. The performer rushed into the chanting and singing in the Icelandic language of our Norse ancestors without allowing us to connect to the somewhat niche material being presented to us. Limited accompanying music or percussion, and no change to the lighting whatsoever certainly distanced the performance from its audience.

At least at the beginning of the performance the tales can be difficult to follow. More names are thrown around than in an episode of Game of Thrones, with little to no context provided to help us understand the background of these characters. Furthermore, within this hasty opening of the performance, we are failed to told why we should care about these tales; how they offered our pre-Christian ancestors an explanation to the same questions we ourselves pose about our human existence in the modern day.

Whilst the opening of the performance was certainly rushed, there is no denying the fact that Williams-Bailey was a truly enthusiastic storyteller. Whether you have knowledge of the Norse deities and myths or not, her visible connection with these tales informs her passionate performance. Her characterisation was particularly strong, with her depiction of Dame Dark being particularly entertaining. Use of significant props added a hint of flavour to the production, but these strengths don’t make up for the lack of atmosphere within this performance. Even the use of song and ritual chant interspersed throughout the storytelling doesn’t add the necessary level of depth to the atmosphere. For a niche topic of folklore, a collective experience is necessary for a connection to the material, yet instead it feels like we are watching a ritual take place before us rather than being a part of it.

Sadly, a passionate performance is overall not enough to save this bizarre and disjointed performance from losing its audiences' interest in a niche area of mythology. 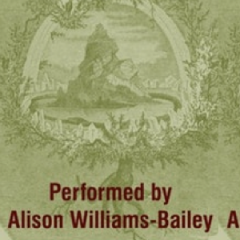 Root Branch Theatre Company delivers a bizarre and passionate retelling of Norse myths, which manages to lose its audience to a convoluted structure.