Gender swapping leading roles in Shakespeare could be the key for ensuring modern theatre is allowing women their chance in the spotlight.

Maxine Peake, Tamsin Gregg and Hayley Atwell are just some of the notable actresses who have made headlines over the past few years for not only taking on a lead Shakespearean role, but for performing as a character originally set as a man. This refreshing modernity brought to traditional theatre is now a choice so frequently made by directors across the country, it is  no longer even met with the outraged columns from the Daily Mail that diverse casting usually provokes.

However, whilst it is no longer radical to cast a female or androgynous Hamlet or Lear, it is certainly an anomaly in the wider theatre world. There are fewer female performers, directors and playwrights than male professionals within the field, with only 39% of casts featuring women. Whilst studies by organisations such as Arts Council England and Purple Seven have assured that this gender disparity is gradually closing, cross-gendered casting is still a vital trend to spur greater equality on stage.

It’s not only casts that lack significant female representation, Tonic’s Advanced Programme research has revealed that the number of professional playwrights are overwhelmingly male. Studying a randomly chosen night in London’s West End, it was revealed that of the 20 shows being performed that evening, only 5% had been written by a women. This is particularly shocking compared to the audience demographics, where women make up approximately 65% of the average theatre crowd.

The contrasting demographics between women who professionally create theatre and those who consume it evidences that women’s stories are being sidelined. Women from BAME backgrounds are being pushed even further to the sidelines. Whilst there are few studies exploring the breakdown of women of colour in popular theatre, BAME male and female performers make up only 29% of casts with famous theatrical institutions such as the National Theatre.

Despite this frustrating norm in the theatrical world, the broadening opportunities for women within Shakespeare adaptations offers promise. Academics have long argued that the timeless popularity of the Bard’s works centres on his focus on essential human qualities of ambition, greed and desire. Whilst these stories frequently focused on men, adaptations using modern settings have the breadth to place women in powerful male roles and still appeal to contemporary sensibilities.

As well as providing more essential roles for women within theatre, cross-gendered casting is also highly necessary in Shakespeare due to the lesser status of female characters in many of his plays. As actress Janet Suzman notes, Shakespeare’s women frequently hold roles as victims or as characters whose existence revolves around a male character and often ‘don’t hold the interiority’ or autonomy of male characters. It’s an imbalance which is particularly noticeable amongst modern audiences, and whilst gender-crossed casts don’t erase the problems of portrayals of women in jacobean literature, it does at least help to adjust the equilibrium.

Whilst there are many arguments against gender and race quotas in theatre, with critics frequently addressing the restrictions it would place on directors artistic freedoms, this year’s summer season at The Globe Theatre has evidenced a strong case for ensuring a role for women in Shakespeare.

The Globe’s artistic director, Michelle Terry, has worked with a 50/50 gender balanced cast on a number of productions, to great critical acclaim. Created on the concept that the ensemble of actors would work collaboratively, without a set director, to cast and create certain adaptations has led to actresses taking male roles, with Terry herself being cast as the eponymous hero in Hamlet.

Whilst the Globe and its company are leading theatre professionals into further debate about the role of women in Shakespeare, and the advantages of a diverse and balanced cast, it shows change is certainly afoot. Whilst this trend has yet to break into other famous theatrical adaptations, or even break the mould of having women lead original plays, it is still making the necessary leaps and bounds to ensure women can take centre stage. 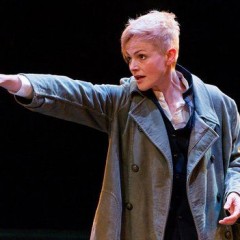 ‘The Lady doth protest too much, methinks.’

Gender swapping leading roles in Shakespeare could be the key for ensuring modern theatre is allowing women their chance in the spotlight.