Voice MagReviewsKing Lear at The Chi…

Sir Ian McKellen at age 78 adds to his achievements, both in Shakespeare and modern film theatre and TV, with his outstanding performance of King Lear, along with the incredible cast. Jonathan Munby blesses Chichester with a fresh concept of Lear, in the intimate space of the Minvera Theatre.

As a 17th member the space heightens the action of the play, making it a fuller theatrical experience. Munby's production of Lear is modernised and therefore far more relevant to its current audience, the concept itself shows an almost parallel universe, which is more familiar and forces us to feel partly responsible for the latter events. McKellen's knowledge of Shakespeare's Lear is extreme, having throughout his career played the likes of Kent, Edgar and Lear himself. He brings everything to his role, creating a magnificent performance and portrayal of Lear.

Sir Ian McKellen who is nearly eighty, the round about age of King Lear, moves spritely around the stage and even though the word most repeated throughout the whole play Is "me"/"I" he acts unselfishly, showcasing the rest of the cast too. As well as the modernised concept, Munby gives a fresh look onto this famous play, The Duke of Kent is a woman, played by Sinéad Cusack. This is a fitting adaptation, as Kent defends Cordelia, wonderfully played by Tamara Lawrence, who played Viola in Munby's Twelfth Night. She also challenges Lear, this character choice gives the modernised concept a new dynamic whilst heightening the relevance. Phil Daniels as the Fool brings a light and playful aspect to Shakespeare's intense tragedy and is a perfect match for McKellens Lear, giving Munbys production more depth and a experience well-rounded. One thing I thought could have been explored more was the movement within the production. During act two the battle scene was portrayed through a physical movement routine, which was well rehearsed, slick and a clever tool to capture the battle scene. However as this was the only bit of a choreographed physical moment it was quite random.

Being a younger member of the audience I loved this bit and thought the show could benefit from exploring this element slightly more. Cleverly the set almost mirrors Lear's mental state of mind. The first act playing out on a large Red raised Circle, covered in a deep red velvet, suggesting Lear's regal demeanour, power and the royalty him and his family hold. The rain pouring down onto the stage space in captivating the audience was almost a representation of Lear loosing control. In act two it becomes a baron chalk white surface, the loss of the red stating the loss of his regal status, giving the second act a more eerie feel. This later foreshadows the latter events for him and his family. Kristy Bushell's performance of Regan was childlike, however cleverly so. Even though Regan isn't the youngest daughter she completely acts like it, by constantly seeking approval from Lear and then her Husband.

She's adds childish giggles throughout, even in the most grotesque scene. This gives the audiences hints of how her life has been sheltered and how Lear treats his daughters like children, not adults, giving them what they desire once they have declared their love for him. The constant giggle makes the character more irritating forcing the audience to dislike her and have more sympathy for Lear towards the end. This therefore leads to a more shocking ending where the two eldest daughters are dragged onto the stage dead followed by the moving death of Lear grasping Cordelia in his arms. Overall an outstanding performance. 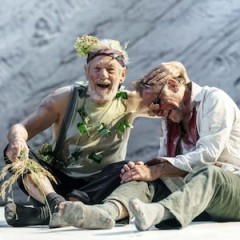 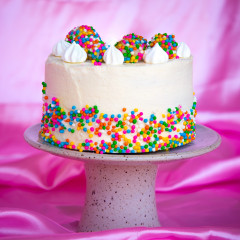