The new musical everybody’s talking about, this fun, exciting, moving story follows a young boy from Sheffield who has the ambition to be a drag queen and ultimately wants to wear a dress to his school prom.

The new musical everybody’s talking about, this fun, exciting, moving story follows a young boy from Sheffield who has the ambition to be a drag queen and ultimately wants to wear a dress to his school prom. The plot is beautifully sewed together with Dan Gilliespie and Tom Macrae music taking its audience on a rollercoaster of emotions and huge love for the main characters. No wonder it transferred!

The story was inspired by a 2011 BBC documentary about Jamie Campbell, the 16-year-old County Durham boy with ambitions to be a drag queen. You are completely sucked into the life of this young aspiring drag queen, the high energy on stage is contagious, and with such a gripping storyline you find yourself cheering on Jamie and wanting to be on stage with him. The inspired character Jamie New, is played by the energetic John Mccrea, who captures a relatable teens hopes and dreams, with a slight difference, due to Jamie wishing to be a drag queen instead of “keeping it real” which his Teacher advises.

This is not a coming out story, the musical focuses on Jamie’s relationships with various people throughout the production. One thing Jonathan Butterell manages to capture is the beautiful relationship between Jamie and his mother, played by Josie Walker, which takes the audience on a journey of empathy as both charterers are so real and relatable to today’s society, and demonstrate such an aspiring bond. The song ‘my man, your boy’ is extremely moving and incredibly commendable for both actors as the audience is in tears with goose bumps buy the end. The support from Jamie’s mother and close friends encourage Jamie to be him, which is one of the many powerful messages which this musical promotes. Inspiring.

As well as being moving, Everybody’s talking about Jamie has the audience in fits of laughter. The humour is so honest and relatable, and have punch lines that everyone can enjoy. Especially when the drag queen group are involved.

The transferring production suites the Apollo Theatre perfectly. Anna Fleischle’s set based on a setting of a school, creates a platform of impressive lighting opportunities added an element of excitement to each number. The set is then able to seemingly revolve into other locations such as Jamie’s house, the drag club dressing room and Pritti’s bedroom.

There was no weak link in this performance the cast gave 100% at all times. Lucy Shorthouse, who played Pritti Jamie’s best friend, gave a warm and truthful performance and radiated the stage each time she entered. And of course we can’t forget about Phil Nichol, playing Hugo. His performance was sprightful, charismatic and everything you wanted it to be.

No part of me would not see it again, stunning performances all round! 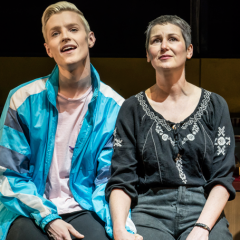 Everyody's Talking about Jamie, and if you're not you're missing out!

The new musical everybody’s talking about, this fun, exciting, moving story follows a young boy from Sheffield who has the ambition to be a drag queen and ultimately wants to wear a dress to his school prom.