A local play for local people, this is what Hull City of Culture is all about.

John Godber's commissioned production for the recent opening of Hull New Theatre invites you to embrace what it means to drop your H's, work hard and most importantly - support the right football team. Welcomed into the King family, in true Godber style by breaking the fourth wall, we hear of their exploits over the years from first dances to life changing diagnosis'. It all unfolds within the neat arc of the 50th wedding anniversary of proud yet sensitive Malcolm King (Martin Barrass), and his relentlessly caring wife Becky King (Jane Thornton).

The pair humbly lead us through their charming story, supported by a band of actor musicians. Led by Ruby and the Vinyl, each song delivers a strong narrative blow at points where dialogue doesn't quite cover it. The company take pride in their large cast, which truly fills the stage and brings the warming atmosphere of a well-needed family gathering. This warmth is shared with the audience as the play adopts a thoroughly Hull-centric heart, but perhaps lacks the spark by the end of the two hour performance to entice audiences beyond East Yorkshire.

Along with the footballing banter, the production comments on the class divide experienced in Hull, a city that ranks as the third most deprived local authority in England. Accompanied by a light piano and mellow acoustic guitar, Godber does well to comment on an issue that may easily have been brushed under the rug in a fee paying audience. Hull's voice is deeply felt.

Each relationship in this family pack has been lovingly fleshed out; from interchangeable father and daughter to solid brothers in arms. Peter McMillan's Karl King offers an honest, older mind from Hull's working class roots, whilst Pippa Fulton's Kelly King demonstrates the successes and sadnesses of social mobility. Fulton articulately portrays Kealy's moral struggle, as she loses touch with her background, allowing a rift to form with her father.

Ultimately 'The Kings of Hull' celebrates the place Hull inhabits in the hearts of its population, and whilst it may alienate audience members from further afield, it invites you to sit round its glowing embers all the same - welcome to 'ull. 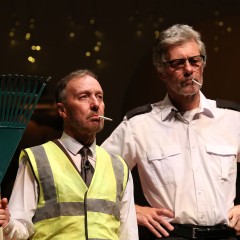 The Kings of Hull

A local play for local people, this is what Hull City of Culture is all about.