Is being beautiful the answer to all of life's miseries, or the start of them?

The most beautiful woman in the world Helen ponders this in her soliloquy, as she is singularly blamed for the long and austere war between the Greeks and Trojans in 412 BC.

Euripides interprets the story with Helen actually incognito in Egypt instead of causing havoc in Troy. Whilst an 'eidolon' (look-alike) version of Helen in Troy was designed by goddess Hera to penalise Paris. Yet, no-one is aware of this forgery and continue to blame Helen for her alleged wrongdoings. The Theatre of Heaven and Hell show Helen's struggle to restore her reputation and be heard in a man's world.

Brownie points must be awarded for staying true to the time period of the piece, achieved with incredible disembodied masks (or 'prosopon') from the National Theatre being worn. These were eye-catching yet chillingly spectral amongst a low-lit background, to add to the menace being advanced towards Helen. Most actors coped well with projecting their voices to a packed audience; despite the lack of mouth room available. Simple atmospheric lighting was utilised by Michael Ward to illuminate the sinister eyes piercing through the masks and staring into Helen's soul.

As this is a translated version of an originally (much) longer play, I'm not sure whether this was the most appropriate 'cut version' of the script to use. I felt like the play was fairly rushed; without a clear cut climax and an inconclusive ending, which made the performance feel like it was on the same note throughout. The beginning was jam-packed with information which did not immerse the audience. Thus, puns felt contrived and I felt the energy of the piece slip. There's nothing wrong with a few monologues consecutively being used, but structurally the audience were drowning in information at an early stage. A play of energies earlier on through interaction may have felt more suitable and would have helped to create much needed tension, to allow the drama to escalate.

Acting was of course of a high standard, with Elena Clements shining throughout as a broken Helen, responsible for a broken world. The amount of words she can express purely with her eyes is outstanding. Her husband, Nicholas Bright, was equally powerful however his power was felt through his volume. At times I did feel that there was a clash of acting styles between the couple - one with a more naturalistic approach whilst the other opted for showing rather than feeling. Opposites do attract in relationships, but I'm not sure if this is applicable here.

Overall, a brave choice of play for a fringe festival and a lot of work has clearly taken place. The story of a woman being voiceless in her respective society will always be a topical issue and I wish modern theatre makers were inspired by the strong, fiesty female characters created in Ancient times and showed this more often.

Tickets are available to purchase until the 27th August here. 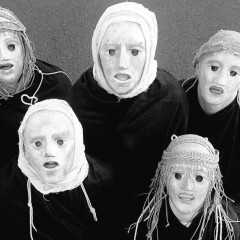 Camden Fringe Festival - HELEN at the Hen and Chicken's Theatre

Is being beautiful the answer to all of life's miseries, or the start of them?