A review of the Behind the Scenes Tour at the RSC, Stratford-upon-Avon.

I attended a behind the scenes tour at the Royal Shakespeare Theatre in mid October. It was a typical cloudy day, and first of all we arranged to meet in the lobby with the tour guide and the four other people taking the tour before we were swiftly taken backstage. We were met with a labrinth of different corridors, all of which were lined with draws brimming with props, makeup and wigs. Eventually, we reached the laundry room which was filled with 20 or so churning washing machines and was adjoined to a room filled with sparkling costumes from an array of eras. It smelt strongly of washing powder, as the tour guide explained to us that due to regulations costumes had to be washed everytime the actors wore them, which explained the large number of washing machines. We then followed her down several dimly lit corridors to a glass box filled with gadgets, lighting gear and looked over the stage. The guide explained how several pieces of the equipment worked, and described the common tasks normally done by someone working in the lighting department. We then got the unique opportunity to see the main stage whilst they were changing the set, which was extremly interesting and a unique chance to get to see the stage disected and apart. It made it clearer how much goes into creating a world, or a certain atmosphere for the actors to perform in.

I thoroughly enjoyed my visit to the RSC, and found the tour very informative. The groups were small and intimate, so the experience felt more personal and there was therefore more opportunities to ask questions to the guide. We also had access to to the majority of areas backstage, so we felt the tour was good value for money. Although, it could've been improved by becoming more interactive, such as asking us questions or our opinions on certain topics. I wouldn't recommend this tour to anyone with children who are age 10 or under because the tour wasn't very interactive so they may lose interest quickly. and become bored. Although, I would recommend this tour to anyone else who has an interest in theatre and would like to discover what backstage life is like. The tour was also very reasonably priced and is definitley worth going to. 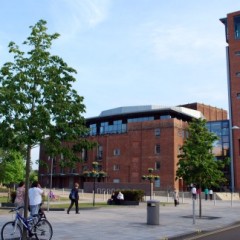 A review of the Behind the Scenes Tour at the RSC, Stratford-upon-Avon.