Voice MagReviewsConfessions of a Per…

An interesting insight to a luxury gym in New York, delivered by Katie Kopajtic in a one woman show.

The show I saw was a 'relaxed performance' and as such the music was quieter and the lights less flashy. Making something accessible is great; and to be honest I don't think there was any major detraction from the enjoyment of the show.

Be prepared to join in with a few well placed stretches. Be prepared to see Katie dive between several characters with good wit and a self-admitting 'attempt' at accents.

There is something endearing about this show. There is raw emotion, and it promisingly demonstrated that relationships are precious. The audience really get on board with Katie's story and I felt a good emotional attachment to the narrative by the end.

It's a story seemingly of becoming a personal trainer, but it's also a story of personal growth - not just her own, but of her clients too. Transitions between the various characters in the story is often quite good. There is some energy to the piece and some work on the floor - tricky to see from a few rows back; but on the plus side Katie really does make good use of levels in the show.

Like much of what I see at the fringe; there is little in the way of set - most things are achieved using one simple chair. I'm sure the lighting would have added even more, but actually the picture is painted perfectly well with Katie just using her words

It's not the strongest solo show I've seen, but perhaps the moments where it's a little less polished is down to the raw truth and reality of the story. It is a unique approach to a monologue; becoming other characters for short stints to best paint the picture; and getting the audience involved with the gym element. The character transitions occasionally could be better - but maybe they would be with the full use of lighting to help. So whilst there's a couple of things holding this back from being astounding - it is an engaging show which from a theatrical perspective could be worked on a bit further and it has the start of being a great show. 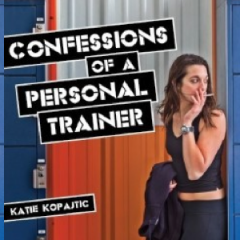 Confessions of a Personal Trainer

An interesting insight to a luxury gym in New York, delivered by Katie Kopajtic in a one woman show.