A witty hour with fantastic adlib, highly entertaining stories and an audience crying with laughter.

Stephen's show was hilarious from the first line, and for the whole performance I don't think a single joke died. The audience provided some material and Stephen grabbed it with both hands. The whole (packed) room just bounced off him. He said we're all like a family unit at the start, and actually we really were by the end of it, so successful was he at making us feel included.

A few lucky souls got sucked in, and when you see the show you'll get why this is an apt choice of words!

Stephen presents a simple set-up, stand-up comedy plain and simple. But he makes brilliant observations about the world around us and his stories are cleverly entwined and witty. He tackles the challenges and perceptions of being gay in an open and honest way - bringing much humour to the packed venue. The stories cover dating, celebrities and culture from a very personal point of view.

He clearly lives by some advice he was given, and certainly was giving out; "Don't put limits on yourself". Such a good mantra to live by. 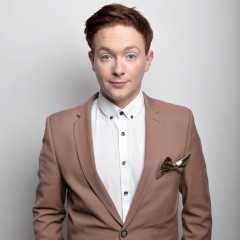 A witty hour with fantastic adlib, highly entertaining stories and an audience crying with laughter.