Voice MagReviews​​Two Plus Ones: Hug…

The 'specky' one, the 'crazy' one and the 'cool' one, three best friends at Sixth Form face your typical teenage dilemma as one decides to fly the nest to university. The trio of overused characters become the focus as the hour of sketch comedy unfolds in front of a packed out audience. The three clearly bright, young comedians perform their second ever Fringe run with pure ballsy silliness. Whilst obvious, the characterisations were done well and the constantly changing, dynamic chemistry between them drove the show forward with conviction.

The sketches were convincing and quite funny, although at times felt almost too surreal. Additionally, the humour was, in the most part, juvenile and immature. Whilst executed successfully, and perfectly valid if this style of humour appeals to you, it didn't work for me, not least because felt like they were clinging onto elements of their own teenage past.

There are only so many ways you can say strange and that was the overarching reaction I had to the performance. The comedians are obviously competent and their timing, use of prop and delivery were perfected, but the content of the show and perhaps their inexperience let them down for me on this occasion. The audience seemed equally as conflicted in their response, some loudly and with excited animation laughed out loud whilst others like me grappled with the concept.

For that hour I was consumed by the sketches on stage, entertained and made to laugh – all huge successes and the keystones for accomplishment in comedy. However, the extents to which those things happened was weak, for an attempt at a humorous sketch show it simply wasn't funny enough and for a performance seemed the boys were trying too hard, unfortunately without the end rewards. 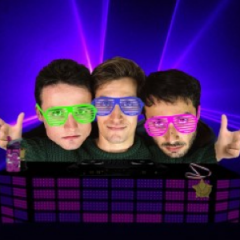 ​​Two Plus Ones: Huge Night In