Maddy Anholt proved herself to be a master of the vignette with this show. Bringing to life a series of different characters each with their own set of obvious connotations in addition to more subtle, metaphorical ones, she highlighted the complex versions of ourselves we all have. It was genius.

Calling upon her inner divas and demons and even the occasional child (and peacock!) Anhold played out each one, transitioning impressively fast between them making use of her exceptional skill with accent and body language. Her interaction with the audience was mostly on point; she carefully balanced the awkward embarrassment that comes with being picked on at a comedy gig with her ability to read the audience and gauge the tone.

All of the characters had brilliant merit in their own right, and when combined with the lasting message of show worked well to build an overall picture of 'herself' – the inner child character was a personal highlight. Anholt's comedic and theatrical capabilities are equally as remarkable, watertight to the extent where I left confused as to who she really is as a person underneath them all. The surreal sketches consumed every audience member in that moment. The versions/characters were infinitely convincing too – we all know someone as a mad as one of the characters Anholt performed.

It was a memorable, funny and intelligent show, let down only by its PG rating. It's incredibly unfortunate that in the audience were a younger girl and one of her parents. Anholt noticed this early on and became awkward when performing some of the very adult content in front of the child. Saying that, she stayed in character and it was very amusing watching her address the girl, telling her to put her fingers in her ears or look away. However, this disruption did affect the show negatively on occasion, shifting the mood and jarring her flow. She dealt with it very well as a performer and it is an unfortunate and avoidable situation but it did impact the quality of the experience as a viewer. That aside, on a different day I know Maddy Anholt is a five star comedian, actor, and performer. 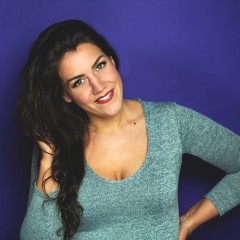