Boris & Sergey's One Man Extravaganza is the first show that got me so emotional I actually welled up. Given that the show focuses on two leather faceless puppets, this is especially impressive.

Given life by Flabbergast Theatre by six puppeteers who practically relish in being visible at all times - going agains the traditional grain of hidden manipulators - the Balkan brothers have your typical performance relationship - one intelligent and scheming, and then the good-natured but ultimately slightly dim one, carried but slightly resented by the more competent. In this instance, Sergey is the competent one.

After putting them in the crosshairs of a loanshark, Boris screwed up their chance of making the money back by failing to win a fixed gameshow. Sergey decides to go it alone, and discards his brother to indulge in a pretentious one-man show that is a critical flop. Brother Boris, meanwhile, has found success in Hollywood, fuelling a bitter jealousy from Sergey.

Sergey's decent into destitution was a heart-breaking affair that actually had me tearing up. The level of emotion that could be conveyed without facial expressions - using movement and music - caught me completely by surprise, and Flabbergast completely exploited that weakness.

There were certainly slower moments through the show, mind. There was a fight scene that started off entertaining, but went on too long, and other jokes did fall slightly flat. I imagine the quiz show section had the potential of being hilarious, but with it relying on audience interaction, on this night it was a bit of a slog. The puppeteers handled it well though.

Boris & Sergey was, on the whole, a superb piece of puppetry theatre. The story, although a bit of a troupe, was delivered in a truly emotional and heart-wrenching style.

So close to perfect, Flabbergast Theatre need to just work on making the show a little less flabby. 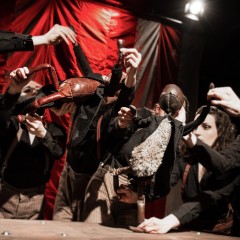