The show started off well enough, with Naz climbing thorough the crowd in character as his stage manager to just make us aware that Naz was unhappy with both the time his show was on, and apparently the venue it was in. I never gave it much thought before but I guess it can have a negative impact if you're in an inappropriately timed show. However, by the end of the show it was the focal point of my attention.

Naz was probably right to moan about the timing of his show, it feels like a big factor why it felt this show didn't connect. His energetic and slightly crude style of performance might have worked well later in the day, but at 14:45 it fell flat on a somewhat unenthusiastic audience.

The show consists of multiple sketches using character comedy, to a really tepid level of success. Some, like the aforementioned stage-manager and the film director, were quite compelling, while others, such as Shania Twain and Jeff Goldblum, died pretty hard. There were several times the audience seemed to laugh more out of obligation or awkwardness than any genuine amusement. Again, this was unaided by the slight unwillingness of the audience to interact with Naz's characters.

A show that had exhibited some good ideas, but was killed by the weaker sketches. 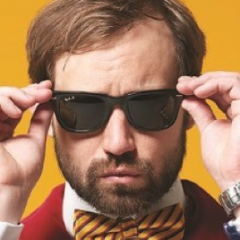