Karl Hyde, from Underworld, is the man behind the innovative Manchester Street Poem, and he talks to Joanne Wilson, a volunteer and participant in the project and Jez Green, from homeless charity Mustard Tree.

Karl Hyde, from Underworld, is the man behind the innovative Manchester Street Poem. He talks to Joanne Wilson, a volunteer and participant in the project and Jez Green, from Mancunian homeless charity Mustard Tree.

The art installation in pop-up UNFEAR aims to tell the stories of Manchester's homeless and formerly homeless. The project has engaged homeless and formerly people across the city through charities like Mustard Tree and has collected their stories, which Karl is scribing by painting on cardboard covered walls live to create the exhibition.

Joanne, who has experienced homelessness herself and has shared her story within the project, gives her story of homelessness and involvement with homelessness charities and, ultimately, this project. For Jez it is an important step in how we relate to people, and understand that homeless people are still human; there is no 'them' and 'us'.

The importance arts organisations working alongside charities and grassroots groups cannot be underestimated, with arts engagement allowing vulnerable homeless people and formerly homeless people to express themselves as, among other things, a mental escape from the situation they are in.

While Joanne sees all the stories as unique, Jez does point to a sense of hope that can be found across many of them, thanks to the engagement of charities and organisations. Karl points out that this is something important to him and his colleague Rick Smith. This resulted in ensuring that the space was bright and well lit, and even choosing to paint the words in white so that the atmosphere was not dark.

Smith was responsible for creating a soundtrack that could be uplifting, collected from across the city. This helped to avoid playing into stereotypes about homelessness, and to create new and more realistic narratives around it.

The most important thing for all of the panelists is the inclusivity of the space, with all kinds of people visiting to see the stories. It was also important that, in both the development and exhibition stages, it could be considered a safe space.

The talk was incredibly interesting and really insightful in terms of how we can use art for community benefit. It was wonderful to hear from those involved as to how important the project has been. 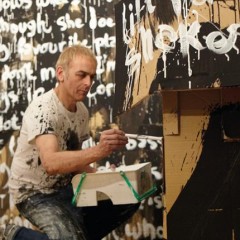 Karl Hyde, from Underworld, is the man behind the innovative Manchester Street Poem, and he talks to Joanne Wilson, a volunteer and participant in the project and Jez Green, from homeless charity Mustard Tree.