An autobiographical solo show that is divisive - but for good reason.

Vikki Parker has been writing in secret for years, but has finally decided to bring her work to the public light under the company Arts Unwritten. Her first show, Voice, is a solo autobiographical piece that explores the roots of trauma and offers a hope of recovery and help.

Unfortunately, you had to dig really deep to find that. The flicking from scene to scene, person to person and traumatic story one after another was difficult to keep up with. That was made further impenetrable by the scenes themselves coming across as random and chaotic. There were some scenes where I had absolutely no idea what the flapping about was meant to symbolise. Perhaps it symbolises and visually represents loss of control and madness? I couldn't say for certain though.

What is undeniable though is that Parker has an absolutely incredible singing voice. Interspersed between the flapping and the TED talk fantasies - that were often difficult to hear - were skits of a woman performing in a club, and far from being hard to hear they were a delight to listen to. Her humorous insights into life were capped off with simply stellar musical performances that managed to pull the piece up.

Looking at the subject matter from a more macro perspective however, it is important that such an pressing societal issue be tackled, and whether or not one considers it to be done well can to some degree be overlooked. Days later I am still attempting to decipher and second guess parts of what I watched, so the play has at the very least succeeded in being thought provoking.

That brings us to the question of how one attempts to review such a piece. Without context, or the inclination to read deeper into actions and meanings, your perception would be that the show is a mess. It's not a superficial play and it certainly isn't lighthearted. Yet, if you go in with the understanding that the show is as chaotic and sometimes as confusing and harrowing as the emotional trauma it discusses, it starts to make a lot more sense. Combine that with the knowledge that Parker wrote this with more personal experience than her confident stage self lets on - not to mention the bravery and almost public service of tackling such an important issue - and order and deliberation starts to emerge from the disarray.

A strong and promising debut for Vikki Parker, who shows herself to be an intelligent and personal writer, but her style won't be for everyone. 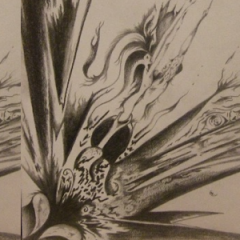 An autobiographical solo show that is divisive - but for good reason.