A self-aware ventriloquist show that fails to push the boundaries.

There was a lot to like in this, my first ever live ventriloquist performance. Unfortunately, it was balanced with an equal number of things that just failed to resonate, or started off well but outstayed their welcome.

This started right from the offset with the show opening with with two actors prancing around the stage as demons. It felt completely out of place, and made no sense to the wider context of the show. It transitioned into Werner's first character, Uncle Alfie, who appeared at the venue entrance and served as an announcer of sorts to Lachlan. Some clever use of props by his supporting actors successfully painted the scene of Alfie's childhood, making the character feel endearing. His musings didn't really land the punch and petered out more than anything. I think it was a case of Werner attempting to make too much out of too little.

Brew's scene was especially guilty of this. The second and final character brought on stage was a 96-year old witch. With context provided by means of a skit between the two supporting actors, we learn that Brew is perhaps a bit of a charlatan.

The witch attempts a tarot reading with an audience member and it went on for far too long and came off as rigid due to its failure to really respond to the participant's response. A second 'volunteer' was given a facemask that Lachlan was able to control, and although it started off as funny (more due to the volunteer's failure to grasp what was going on) it again continued far past what was necessary or welcome.

Although there is no disputing that Lachlan is technically talented, talent can only do so much to mask a dull and muddled script. Both Uncle Alfie and Brew are in their own rights great creations that have very great one-liners and moments of brilliance, but that doesn't detract from the frequent number of times they labour a point or are used to execute a joke that just fails to land.

Lachlan also never fully appeared comfortable on stage, appearing quite rigid and awkward. There were a few moments where his more affable personality shone through, often when using his puppets to break the fourth wall and joke about something he messed up. But for the most part he never seemed at ease, and the laughing and apologising for his puppets comments came off as disingenuous and forced.

Indeed, many parts of the show felt forced. I personally failed to make the connection between Brew and Uncle Alfie. The skits where Lachlan pretended to be ill while confronted with proclamations on the nature of love. They just felt awkwardly juxtaposed to the wider show.

I think Lachlan attempted to be theatrical and bold with his show, which should definitely be encouraged. However, it also feels as though he only had enough content for a 40 minute show, but scraped an extra 20 through prolonging jokes beyond their expiration, and taking us down whimsical paths that delivered no payoff.

Despite all of this, the parts done well were done exceptionally well. There were even moments where I had to remind myself that they were puppets we were watching.

Lachlan Werner is one to keep an eye on. As he grows more comfortable and confident, he will become a big name in the cabaret scene! 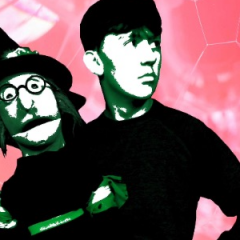 A self-aware ventriloquist show that fails to push the boundaries.