Kate is new to town and is undergoing an attempt to assimilate to the new language and culture using 80s music and poetry. She works in a coffee shop but is having a hard time of it, due to the language barrier, horrible customers and a manager that isn't supportive. Her life is only made worse by one patron who has taken an unhealthy liking to her.

Tadgh's existence appears to revolve around practicing his singing and dancing so when he goes to the open mic night he can hold his own with his idol Casanova, and impress his true love, Grá.

They live in opposing apartment blocks and, although being intimately aware of each other's lives and timetables, never pluck up the courage to talk to each other. That is, until they accidentally meet each other on an adult sex chat site - "Hablo Hot and Heavy".

There becomes a bonding of anonymity until the penny drops and they realise who it is they're talking to. It is here that Tadgh drops the bombshell that he hasn't left his room in 19 months.

From here we witness both characters as they face their loneliness and develop a friendship. Over the same time, it transpires that Kate has also descended into the hermit lifestyle and both struggle with trying to break that mental barrier down.

You walk in to see both characters on stage, as is becoming the norm. Said stage is very basically decorated; just two chairs adorn the space. The start of the show was less than impressive, and did have me dreading having to sit through the whole thing. However, I am glad I stuck with it - once it got going it was an engrossing performance where you genuinely feel invested in the story and the development of the two characters.

We have all felt lonely at one point or another and that is what makes the show so relatable. In those times, we have felt like no one else understands quite what we're going through and any sign of interest or compassion are held and cherished.

It wasn't all misery though. There were many comedic moments that stopped the performance from getting dour. It also touched slightly on issues of racism, and the struggles of being an immigrant, but it was never overt, and didn't make any attempt to be political. It was a mere throw away comment that only contributed to the wider story.

There were a few niggling issues which held this performance back. The first was the aforementioned slow beginning. I feel like the show started on the backfoot and then had to work to bring the audience back into the fold, which, to be fair, it did brilliantly.

Another is that the progression of time never felt particularly clear. While Tadgh was explicit in his hermit lifestyle, it didn't feel clear that Kate had descended into a similar lifestyle. We knew she hadn't been to work, but that didn't necessarily reflect the deeper issues she was experiencing. There were also points where Tadgh's singing started to drown out Kate's dialogue, but these were few and far between.

Network Diagnostics is definitely one to catch if you can. Part of WINDOW, Brighton Fringe's Art Industry showcase, it's easy to see that Octopus Soup Theatre are going to explode in the next few years.

Slow to get started, but once they found their pace it became an intriguing and captivating insight into the nature of loneliness and isolation. 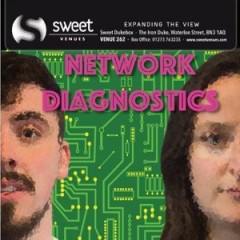