By Random Acts Midlands, Dale Cullis and Emma Powell bring us an enthusiastic expression of the barriers still faced by women today.

'The rise of women does not mean the fall of men'

Ah the patriarchy; our arch nemesis. In the 21st century, us women still have to compete with the 'Glass Ceiling' effect, which refers to an unacknowledged obstacle to advancement in a profession either due to gender or other factors like race, ethnicity or religion. The term is synonymous with women's inferiority in the workplace, with the Institute for Fiscal Studies (IFS) stating that 'Women earn 18% less than men on average' and Hilary Clinton's failure to shatter 'that highest and hardest glass ceiling'. The ceiling has yet to fall.

Shropshire-based filmmakers Emma Powell and Dale Cullis created the short film 'Glass Girls' as part of Random Act's 'First Acts' series. If the snappily, choppy alliterative title doesn't intrigue you, I'm sure that the film will definitely stimulate a reaction.

A very stylised film indeed, with the colour blue heavily painting the scene the film fades to show a school. The unnaturalness of the colour blue shows the audience that it's not a school dripping in sunny happiness, with children singing, laughing and happily playing games of hopskotch or skipping rope. No. Instead this is no ordinary school. Each of them obedient to the crystal clear glare of their tutors and the girls are learning to shatter the glass ceiling. Lessons include tough, intensive physical routines of burpees and stretching high enough that they too can reach that dreaded ceiling. Their facial expressions show a glint of joy as they are enjoying this process of becoming indestructible and able to fight the patriarchy. Not just in terms of physical activity, but the close up shots of electric cables show the audience that these students are gender fluid, capable of taking on stereotypically masculine duties.

The young girls used must range from ages 5-15 and none of them seem like the butter-wouldn't-melt type of girls we're led to expect with pig tails, pleated skirts and ribbon bows in their hair. Some of the younger children seem happy, some of the older girls seem upset and I feel pathos for them as it is presumed that they've endured this training all of their life and they still aren't able to escape. It is all very uniform and I'm not 100% sure how I feel about it, as both a female and a critic.

The establishing shots of the high ceiling complete with the space add to the idea that they are locked inside, having girls achieve their dreams and aim higher. Dressed in the bland outfits of blue uniforms, the idea is that they are equal to men...but the fact they are in uniform is bland and the fear of entrapment has already set in for the poor girls. The asynchronous, non-diegetic music overhead juxtaposes the sense of entrapment as it's glitchy and slightly discordant, like a repetitive drum. Even the transitions are choppy and rigid to convey this idea of uniformity.

I felt that if I hadn't read what the film was about beforehand, I wouldn't have understood it, due to the execution. This was the case as I showed a younger sibling, who was confused and said it could convey the bell jar effect linked to depression and links to suicidal thoughts or self harm which were valid as there is a sense of the need to escape being conveyed throughout.

The final scene is provocative, yet unsettling and is definitely something you need to watch to settle your opinion on. 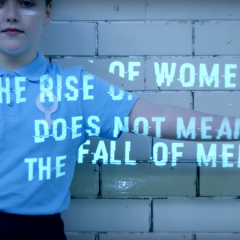 By Random Acts Midlands, Dale Cullis and Emma Powell bring us an enthusiastic expression of the barriers still faced by women today. 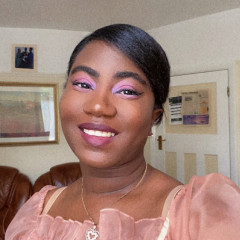