YA author Marcus Sedgewick takes us on an intriguing journey to Mexico in his latest book.

After eighteen years of writing, having produced nearly a novel a year, author Marcus Sedgwick finally has his own slot at the Bath Children's Literature Festival.

Discussing his new book, Saint Death, and the research that went into it, we are transported to the city of Juarez on the Mexican border, supported by pictures from his trip there, first hand accounts of what he saw, and ultimately the trailer for his book, which sets up the dark premise to the plot.

Not one to shy away from difficult subjects, Sedgwick's new novel is rooted in the heart of the drug trade, with a young man literally gambling for his friend's life. The book represents life and culture in Juarez, as seen in the title, a very literal translation of Santa Muerte - a figure representing death who many Mexicans have come to worship. Sedgwick explains that he seeks to honestly represent life on the Mexican border. The idea of honesty in his work is particularly important to him after he was asked to change the ending of his first published novel at the beginning of his career, which he sees as being false. This honesty is clearly something that shows in his most recent novel as he admits it has a difficult ending, reflecting the reality of living in Juarez.

Sedgwick's career is incredibly interesting, with few writers having written not only so many, but such different novels. Sedgwick covers a wide range of different topics in different locations, something which he admits would be difficult to do now, as often authors are expected to produce work in a similar style and familiar subjects by their publishers.

'Are you deliberately writing for young people as opposed to adults, does that censor your content?' asks an audience member. Sedgwick's response is interesting - it depends on the story, and it isn't about the complexity or content, but rather the tone and intention. He finds that older children and teenagers often want more honesty, as they are too frequently faced with happy endings. Sedgwick won't tone down the content for YA fiction deliberately, and it is clear that there are some serious topics covered in a number of his books, however he also acknowledges that they don't need to be graphic. As such a successful author, broaching these more serious issues is clearly key to his success and, as his most political novel yet, Saint Death promises to be another thrilling read. 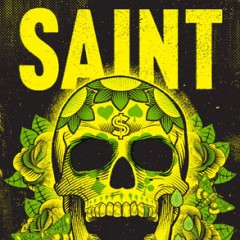 YA author Marcus Sedgewick takes us on an intriguing journey to Mexico in his latest book.