He peeks out every so often. His entire body is hidden by the cape. The figure that emerges is surprising to say the least, completely absurd. Just like the whole routine. The person on stage introduces himself as the ghost of John-Luke's father because John-Luke couldn't make it. This begins an hour of gags and anecdotes and the most ridiculous audience interaction.

The clowning is sad clowning, the show basically amounts to predicting how people might die. He delivers anything of any remote excitement with a terrifying gruff north-eastern voice but it contrasted with the gags creates such an uproarious laugh. He shows a versatility that few others could offer. Some parts don't get quite as strong a reaction, but those that do are raucous.

His dedication to the costume is immense and either very intricate or the most random selection of things found in a novelty fancy dress shop. Altogether witty and creepy in equal measure as he knocks people in aisle seats out when he makes his way through the audience. There's also a bit of fake voodoo, which is audacious and barely comprehensible. Making statements through ridicule is at its best with Roberts.

On top of all this, the ways he predicts people will die are baffling and inventive and the surprise impressions are spot-on. Spray on some inevitable political commentary for good measure and the show is a riot. Ridiculousness in the highest measure but all the more brilliant for it.

John-Luke Roberts Builds A Monster is on at 18:55 at The Voodoo Rooms until 28 August (exc. 24 August). For tickets and more information, visit the Fringe website. 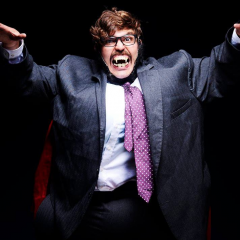