Voice MagReviewsTez Ilyas: Made In B…

A dangerously brilliant hour and not only for a fellow British-Asian northerner.

Made In Britain addressed key issues within and a lot of the comedy that comes with growing up British-South Asian in the North West. Therefore, naturally, it was easy to relate to and that made a lot of the humour all the funnier to myself. The fact that everyone else laughed as much as I did – although through somewhat more gritted teeth of awkwardness – is testament to how Ilyas is able to engender a topic, which, now, is more firmly on the agenda than for a long time.

Of course it was not all as convenient as me being able to relate to everything he said: Ilyas, sans beard, also delved into the highs and lows of being a Muslim in Britain when I am not. The audience was made up with people of varying degrees of similarity to Ilyas and it worked for everyone.

It wasn't entirely about identity: he proves himself far more than just another British-Asian comedian doing stand-up about growing up like they did in East is East. He knows every tool it takes to tell a good story. He steps up for his sophomore solo show. He is madly quick-witted and, most importantly, subversive – he takes the regrettable stereotypes, warps them, and forces them down your throat.

MIB takes a forward thinking, hard-hitting, novel and altogether universal approach to the need to talk about identity. Expect and hope to see far more of him.

Tez Ilyas: Made In Britain is on at the Pleasance Bunker Two at 17:30 until 28 August (exc. 15 August). For tickets and more information, visit the Fringe website. 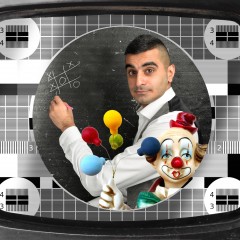 Tez Ilyas: Made In Britain

A dangerously brilliant hour and not only for a fellow British-Asian northerner.