A ridiculous show full of deception and stupidity.

I personally found this show to be way too pantomime-like to be thoroughly engaging. The play is intended to be over-the-top, but in many cases the stupidity went a step too far for me, crossing that fine line into ridiculousness. I felt this response was echoed throughout the room, the audience weren't laughing in many of the intended moments, and there was an incongruity in styles, certain moments just not working with the overall feeling of the piece.

The scene changes were big, so a curtain was tracked across stage for these and a video of 1960s Brighton was projected onto it. This seemed to be the most enjoyable thing for a lot of the audience members, marvelling at how quiet the streets used to be, and what Brighton used to look like. As the play went on, the scene changes either got more complicated or else the stage crew became less slick, as towards the end of the show the curtain was being opened for the next scene before the crew had finished the change-over, which for me, somewhat ruined the illusion.

The singing at the beginning and end of both acts was good, although I felt as though the full cast weren't natural singers, and one performer seemed near on uncomfortable sining to the room. That said, the majority of the actors were clearly talented, and there were some good performances, it was a shame that the kookiness felt that bit too forced to really pull me in.

Overall, although funny in places, this show wasn't really to my taste. 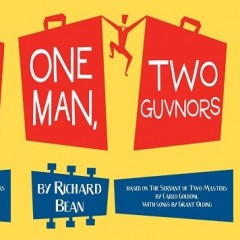 A ridiculous show full of deception and stupidity.