If you're looking for a show about autism, family issues, chocolate brownies, and worldwide travel, then look no further...

The Bula Loop, put simply, is a statement about autism - created on behalf of, and donating to, the National Autistic Society. It focuses on a family who are trying to cope with an autistic son, and who are struggling to deal with what's going on around them.

Upon first glance, the play seemed generic and somewhat plain, but I felt that as the play progressed, I came around to the idea that it is perhaps intended to be this straightforward, offering a direct look at autism and the domestic trials that come with it. You've got your drunk father, a stressed mother, a son completing his education and Adam, who likes animals and struggles to understand people. As a teenager who has autism myself, I did, at times, fine the play to be unrealistic - for instance Adam's 'barking' and some of the family fights - but for someone with less experience of autism I believe that its blend of serious issues and light-hearted humour could really make an impact. It would certainly be an enlightening experience for a younger audience, who are learning about autism for the first time.

Although I feel that the performances and dialogue could be improved upon still, I would this recommend this play to anyone who knows little about autism and asperger's syndrome, and is going with an open mind. 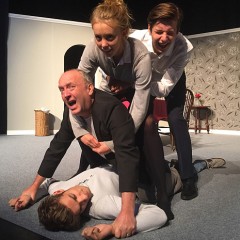 If you're looking for a show about autism, family issues, chocolate brownies, and worldwide travel, then look no further...