A Review of the film 'LUV'

Despite this film being released a few years ago, I only got around to actually watching it a few weeks ago. It was something that I had brushed past on Netflix, and thought it would be interesting to watch in the future. Eventually, I got around to watching it. And I was fairly impressed.

It wasn't the best film I've ever watched, but it certainly kept me gripped throughout. Not many films do that for me, as my attention span isn't the greatest. I usually switch a film off if it doesn't grip me within the first 15 minutes or so. From the beginning, you are following the life of Vincent and his nephew Woody. Vincent was recently released from prison and wants to show Woody some survival skills. The story progresses very quickly and his nephew experiences many things that the average 11 year wouldn't.

The film contains some brilliant performances from Common (Vincent) who perfectly portrays an individual with a dark past. At the beginning of the film, he attempts to appear clean cut for his nephew. However, Woody learns reality very quickly. Woody comes into contact with weapons, and his gets his life put at risk multiple times. This just shows the type of lifestyle that his Uncle Vincent lives, and Woody was thrown in head first.

The film consisted of some brilliant soundtracks and was generally very well produced. Knowing the lifestyle that Vincent has led left me feeling worried for Woody throughout the movie. As things begin to do downhill, Vincent's stress becomes evident and I felt a similar feeling even as a viewer. The storyline felt very real as I watched it, and every move started to feel like a potential risk for the pair.

I found the movie very sad. Mainly due to the fact that this sort of thing probably happens in real life. There are probably 11 year olds out there who are already involved in criminal activity. When something begins so young, a crime filled life becomes much more likely. Just seeing Woody holding a gun and seeing the fear in his eyes as he held it was chilling to watch.

The film isn't going to magically stop crime, but hopefully it will raise awareness of youths being involved in criminal activity. This is a real thing that happens today, and children's lives are sadly cut short when they become involved with such things. Lifestyles like this usually end up in one of two places - Prison or death. I feel that this film focused on what life's really like for children who live like this, and hopefully older individuals will think twice before involving children in what they do. 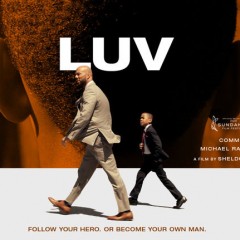 A Review of the film 'LUV'