This is my review of Hairspray The Musical, which is currently touring the UK!

On the 12th of October i went to see Hairspray at the Empire in Liverpool. As it was an opening night you could feel the buzz in the air before it even started, but as soon as that curtain went down for the final curtain call, the sense of happiness and excitement that filled the room from the audience was overwhelming!

This was one of the musicals i was lucky enough to go into with a clear mind, yes, of course I've watched the film but it was quite a while ago so i wasn't sat there throughout the performance with the constant thoughts of 'ooooh that wasn't how they did it in the film'! Where as with musicals such as Les Miserables and Mamma Mia, i have to admit i did do the comparisons, which I'm not proud of!!!

Even though this feel good musical left you dancing and humming away to 'without love' or 'welcome to the 60's' as you made your way home, you still have to remember what the story was actually about. I think the fact that they've gone about telling a story about a really important part of history in this fun way is a really good way of getting the message across.

The story is set in Baltimore in the 60's, and a young girl called Tracy has the dream of becoming a dancer on the after school show she watches with her best mate, after attending the audition and being rejecting she meets a group of black people in detention, who you can be seen getting segregated on quite early on in the show. This group of dancers aren't allowed to dance on the show full time and have been limited to one show a month called 'negro day'.

Lets just cast our minds back to the 50's and 60's when racism was at its peak, groups such as the KKK where at its highest amount of supporters and racism was a daily occurrence and even though things have changed thanks to people such as Martin Luther King and Rosa parks plus many many more, racism still happens today!! It happens towards black people. It happens towards white people! It happens towards 'those foreigners who've come to steal our jobs' and i think this musical makes you stop and think about the way you talk about people and how you treat them without you evening knowing it because you're too busy singing along to one of the songs!!

I think it was also a real special time to be seeing this musical because October is one of the black history months! And i personally believe its important to make sure every remembers the past and what happens. Yes, we learn it in school but what about after school? There was people there of all ages, under 10 who might have no idea about black history and what happen and older people who might of been around then all going away thinking what they just saw, so its a fun and accessible way to teach people a lesson!

The role of Tracy was played by Freya Sutton who captivated everyones attention and their hearts from the moment she entered the stage. Her vocals were outstanding and the way she committed to everything she did just made the 2 hours it was on fly by and feel like nothing!! Two of the actors who stood out the most to me though were Tony Mauldsley who played Edna, Tracy's mum. This character was one of the characters that kept the show from going dark, i think it needed that comedy element to keep it light and family friendly whilst keeping in the important facts and Tony did this perfectly!! There was a really special moment in the night when they sang 'Welcome to the 60's' and edna gets dressed up in her new sparkly outfit and as soon as she was revelled the whole crowd went wild! and i think what makes extra amazing, was that Tony is from Liverpool so it was like his home welcoming him back! The second actor that stood out to me was Monique Young who played Penny, Tracys best friend. Penny is one of the characters who ends up becoming in a relationship with one of the black lads which as shown by her mum is something that was unheard of and shocking to most people so her character was important in that way but at the same time, like Edna, brings that comedy aspect with her ditzy personality its hard not to fall in love with her. By the end of the night she to was one of the people who got one of the loudest cheers.

And of course i cant finish this review without mentioning Claire Sweeney, i think she was the person everyone was most excited to see because she's from Liverpool and we were welcoming her back as well as Tony! When that final curtain call came around and she was finally allowed to break character you could see the shear excitement and happiness to be performing in Liverpool in her eyes. She too had one of the loudest cheers because she's one of our own!!

If you can get down to your local theatre and watch hairspray whilst its on tour i would HIGHLY recommend it! search 'hairsprayUKtour on twitter or Facebook to find out how to by tickets!! It really is a show for the whole family! 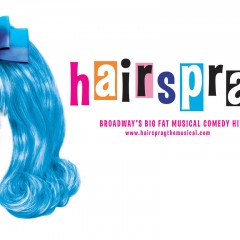 This is my review of Hairspray The Musical, which is currently touring the UK!