These hard-rocking heroes from London faced a lot of criticism due to frontman Charlie Simpson's previous pop career with Busted (now McBusted…). However, views soon changed when they exploded on to the scene with their debut back in 2006… (Honestly. It's that good. Everything exploded)

"Grand Unification." This name is usually associated with the successful Japanese anime/manga series "Evangelion Neon Genesis" (If you have no idea what this is then I am truly alone), which reflects the band's fondness for the series. However, for this album, the title refers to the album as a social commentary, reflecting themes of war, humanity's greed and the end of world. Using a creative and artistic blend of heavy metal, post-hardcore and alternative rock, the album forces the listener to face up to a world that is slowly decaying into a mess of self-destruction.

The album opens up with "To Sleep", thus entering us into a dream-like state in which the album retains mostly throughout, until we are then asked to "Wake Up" at the climatic ending. Straight after, we are almost thrown off our seats with "Grand Unification Part 1", a metal/post-hardcore track that boasts lyrics of rebellion and political uprising, thus beginning the album's story of the end of society. A menacing track indeed; this song is often been a popular favourite by fans of Fightstar ever since its release as a single, due to its mosh-inducing riffs and angst-filled lyrics.

Next on our journey is the powerful ballad "Waste a Moment", a song dedicated to the 2005 London Bombings a few months prior to the album's release. It fits in well with the rest of the album as, in context, the song's lyrics refer to confusion and fear as everything around the unnamed protagonist crumbles into panic, anarchy and death. After this, "Sleep Well Tonight" acts as an unsuccessful reassurance of what's just happened, with the lyrics referring to the protagonist finding ways to deal with the world's demise emotionally.

The rest of the album's story then follows the main character from this point onwards as he joins the army for some sort of worldwide martial law and what sounds like the beginning of a World War III, only for it to almost wipe out the rest of the human race, and as a result the character is left with a clear sense of hopelessness and isolation (The songs "Paint your Target", "Build an Army", "Here Again (Last Conversation)" follow in this order).

Having listened to this album almost a thousand times and never getting tired of it once, the album most definitely rocks! As the years have gone by, "Grand Unification" has become more and more relevant to the social issues surrounding us today, such as terrorism and the British public becoming more paranoid and fearful of what is to come. Therefore, I believe that this album should be up in ranks alongside Radiohead's "OK Computer" and Pink Floyd's "The Wall", because it seems to almost predict what will happen next if something doesn't change soon, as well as present us with the disgusting view of the human race. I use this album, consequently, as a window into the post-apocalyptic world, and a glorious sign of hope, because if we were to "Wake Up" from this increasing social nightmare that we're descending into in 2015, we can change what has been damaged and therefore create a brighter and a more peaceful future for many generations to come.

Do you agree? Check out Fightstar's debut on streaming services, or buy in-store and online, and leave a comment below to tell me what you think! 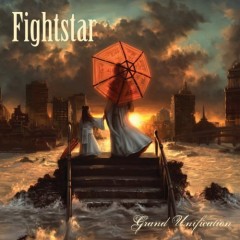 These hard-rocking heroes from London faced a lot of criticism due to frontman Charlie Simpson's previous pop career with Busted (now McBusted…). However, views soon changed when they exploded on to the scene with their debut back in 2006… (Honestly. It's that good. Everything exploded)