Voice MagReviewsThe Orchid and the C…

Did you know that there's a Bristol in Australia? Me neither. Well, I do now, and so do you.

The Orchid and the Crow is a beautiful piece of one-man theatre, It is the story of one man's struggle through life, religion, cancer and Lance Armstrong. It's a little bit of a strange story, and I shan't spoil it by revealing any more than is told in the biog on the website.

The delivery of his tragicomedy is punctuated by self-written songs, clever animations, and quick costume changes, clearly showing his progression and acting as a useful point of reference. The songs themselves are catchy, but aren't going to become platinum. They serve a purpose, and they fulfil that purpose well enough – they break up the engaging storytelling, making it feel like a series of shorter pieces, as opposed to one long one. The first song comes right at the start, with a punchy, rocky number that makes the audience sit up and listen, and it sets the scene for the background to his life. His style of music is unique, to describe it I can only compare it to "if Simon and Garfunkle met AC/DC", which I have to admit is not a sentence I thought I would ever write. The songs aren't all rock, some of them are quite moving, and not all of them have words. Sitting at the front I was treated to a view of his impressive pedalboard – he has an electric guitar, by the way.

Speaking of seeing some impressive things, this show does carry a slight nudity warning, as at one point we are... treated (for lack of a better phrase) to a view of his rear end and undercarriage. Yeah. Just watch out for the surgical robes.

This show is fine, but nothing more. If you're looking for a compelling story about a man's life, from childhood ideals to seeing his heroes in a different light, then it's for you. Want a musical extravaganza, or some stand up comedy? Find something else.

The Orchid and the Crow is performing until the 30th August at the Assembly Roxy. Tickets and more information can be found on the Fringe Website. 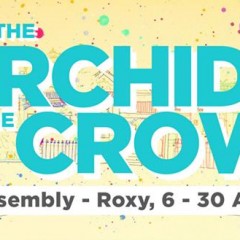 The Orchid and the Crow

Did you know that there's a Bristol in Australia? Me neither. Well, I do now, and so do you.