The Bar, the Boy, the Beach, the Boxer, the Bulldog, and the Bi- uh. Horrible woman. Carry on.

Acts of Redemption is a series of 6 short stories – performed as monologues, and each one is as enthralling as the next. The stories are all different in terms of plot, but also delivery, presentation, and style. Some of the stories are hilarious, while others are heart wrenching, but all of them have a similar theme – redemption, self-discovery, and loss. I shan't go through each of the stories in great detail, in fact the summaries – which you could argue will give more detail on the plots- can be found on the performance's page on the Edinburgh Fringe website.

As I've mentioned previously, each of the stories were different, and as such each of the performers has different characters, each of which were fantastic in their own right, but in terms of pure character, the standouts for me were the woman that was asked if she was okay, the gentlemen with the dog, and the chap with the vicar for a father – these seem like vague descriptions of the character, but it's easy to work out who they are once the plays begin.

The piece comes across as though movement has been used sparingly, keeping the attention on the faces of the performers, so you can focus on the words they say, and each word is so important. Each movement used is important, powerful even, showing great personal growth within the characters. The stories themselves are fairly predictable, so if you're looking for revolutionary plots, then look elsewhere. The reason to see this show is for the storytelling. This show condenses storytelling down to it's core elements – it is infact a great shame that the stories themselves aren't particularly groundbreaking. Another qualm I have with the stories is that they're unconnected. There is nothing that binds them together – other than the fact that they're on the same stage, and have been directed by the same person. This is more irritating to me than you might think, because as I watched the first few stories I was looking for crossover – perhaps this chap knows her through this fellow, or maybe they did such and such, but no. No continuity throughout the stories, which is a great shame, especially as a large portion of the show is dedicated to having 3 of the performers on-stage at once, telling stories in sections, swapping between each-other. This piece could have done so much more with what it was given, and it is a little bit disappointing that the outcome – while good – was not as good as it could have been.

If you enjoy good stories, about personal character growth, and phenomenal performances that will bring you to tears, fill you with rage, and make you laugh at the futility of life, then you'll want to watch this. If you like consistency within a show, and to watch something that is so brilliant and clever that it will blow you tiny mindhole? Probably not for you.

Acts of Redemption is performing every day until the 30th August (not 18th) at the Underbelly, Cowgate. For tickets and more information, visit the Fringe Website 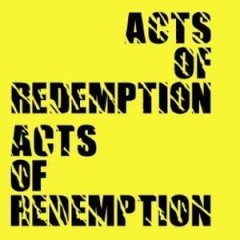 The Bar, the Boy, the Beach, the Boxer, the Bulldog, and the Bi- uh. Horrible woman. Carry on.