A well presented musical featuring a talented cast. A great way to see in your afternoon.

This is immersive theatre from the start. As you enter the auditorium (one of the more spacious venues at the fringe) you are greeted with excellent pre-show performances and audience interaction. You haven't yet met the characters, but the scene is set.

Urinetown is a show based on the issue of having to "pay for the privilege to pee". A musical of two halves, the story progresses through the battle of civil injustice, love and death.

You'd be forgiven for feeling like the opening feels much too like a lesson on Musical Theory. A slight cringe went through me. But as the production moves on, the device is used well by the narrators to establish what is going on, adding another layer of sarcasm perhaps to the events unfolding. It certainly helps the show keep it's pace.

This is a full on musical theatre piece, and done exceptionally well with a good level of dramatic performance, singing from some hugely talented individuals (who as an ensemble create a sublime sound) and choreography that is executed with ease, a clear sign of committed rehearsals.

The choreography & movements on stage were slick and well timed. There are objects passed around the stage by the performers, there are times when one performer throws props (including a mop!) and the receiving performer does not drop rhythm or tone whilst moving & singing. These movements are purposeful, big, and precise.

The dancing is in sync, but so too is the music. The show features some great harmonies. Building tracks from one singer to the whole cast. They even made their own beats using foot stomps, as a lovely compliment to the great musical direction in place.

These are delivered not as a generic performer, but always with the ensemble embodying their characters and leading to whoops from the audience after every big musical number.

I've been highly appreciative of the show. Even when there were some particularly cheesy points, they just feel a part of the presentation.

The soundscape is well composed and executed as mentioned, but the lighting was a mixed result. The design aspect working with the set & costumes was generally well thought through. And I'm always a fan of well done gauze. But there were countless backstops & washouts that feel a little lacklustre and are unfortunately noticeable - especially when every other element has been well thought out. The lighting also seems to have some unnecessary cues, perhaps creating additional complexity that took away from the basics being well executed.

However, the costume design was great with descriptive & practical wear which worked well with the ingenious set that easily became the settings for multiple spaces without the need for rotundas or complex movements. The portability of the stairs, the use of traps and some good feature lighting in this respect gives a simple and effective feel.

The show has a somewhat 'Les Mis' feel and I could easily see this cast being the next cast in 'Oliver' too. With several at the level of being recording artists themselves.

You'll need to enjoy musicals to want to see this, but if you do then it's a no brainer.

Urinetown by the Royal Conservatoire of Scotland is at The Assembly Hall until 31st August, everyday except Monday's. At 11:45. 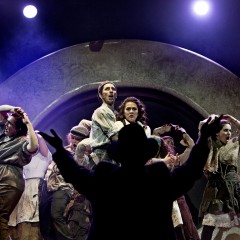 A well presented musical featuring a talented cast. A great way to see in your afternoon.