A satirical take on the world in which we live. Sharp truths, witty observations and ironies exposed.

This is a late evening show restricted to those 16+ and thankfully the manner of delivery encourages you to keep your wits about you (that's if you were up at 6am to get to the fringe).

The Man is a character, more a notion, of someone in the speakers corner of Hyde Park, London. A Jester character like you might find from a film such as Watchmen, is what we are presented with.

He takes a not so light look at the dependencies we have in life today. He quips an "iPiphany" is what we have today. He also presents a well balanced and satirical argument on religious logic. Covering many angles and essentially establishing the irony of our differing approaches to fundamentalism across the spectrum in just one section.

I found that his general delivery & character development was technically excellent. He had a wonderful way of linking back to earlier jokes which kept the audience both engaged and on their toes!

If you enjoy some satire, a derision on the state of the world, and irony in abundance then this is well worth a watch. If you're staying a bit out of town and relying on catching the last train rather than a bus or taxi, then you might regret the time spent. Unless you're of parenting age; in which case I feel you might have a greater appreciation.

But this is at least something different & unique to much of the stand-up available. If I were 10 years older and in my mid-thirties upwards, I think this would be a 4* show. The chuckles I got weren't the same as howling enjoyment. 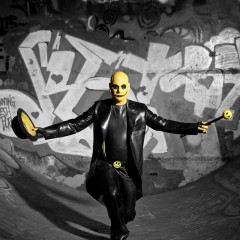 A satirical take on the world in which we live. Sharp truths, witty observations and ironies exposed.