A weird and wonderful show that keeps you guessing.

The Quentin Dentin Show can only be described as one of the most wonderfully weird acts I have ever seen. It was jam-packed full of bizarre songs, odd styles of dancing, and a whacky storyline, performed by a clearly multi-talented cast of five actors and a live band.

The show is described as being like The Rocky Horror Show, and they are not wrong there. I could clearly see the influence the film had on this play.

I feel like this show, as it has such strong routes in The Rocky Horror Show, can only truly be appreciated by those who have seen the film, as otherwise the storyline could just come across as completely weird, with no explanation.

Having seen The Rocky Horror Show on several occasions, I found I understood the foundations of the play a lot more and I was able to appreciate the style of the songs and the dancing more than some other members of the audience did.

The show is definitely a fun one to watch and has some very funny lines in it. The band are very skilled and the music was good, although I found it to be far too loud for my liking, and the microphones were turned up to a volume that made me cringe every time a song started, in order to compensate for the volume of the music.

Despite this, I enjoyed the show, and it was definitely the most bizarre thing I have seen during my time in Edinburgh! 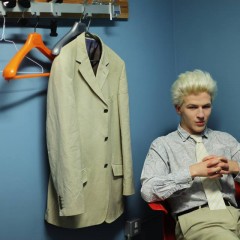 A weird and wonderful show that keeps you guessing.