A one-woman show tells the audience a story about the implications of a world in which technology can pre-empt our decisions based on our digital fingerprint.

Jenny Lee stood on the spot for an hour and told us a story. She danced around with themes of confidence, self-deprecation, our inner-most secrets and things that are generally reserved for our own minds in the guise of cosmopolitan woman, 'Banks'. The high-concept story exposed to us the universal nightmare of all these things being known by someone else. Even though that person was inanimate and was unlikely to tell anyone else, the show was scary.

Heartbeats referred to what is contained within us and Algorithms referred to the bits of information that we wantonly donate to the internet in order to gain some sort of recognition for them.

The only narrative catalyst beside Lee was the sound. This deserves praise in two ways. Both in its design -- hyper-functional and well-suited to the high-concept nature of the show -- and its length and timing. It worked in tandem with Jenny Lee's intrinsically well timed performance to make a fluid, fully comprehensible play.

Along with this, the comedic elements about our inner thought processes were welcome additions to the drama. Unique observations about the way we speak to the people around us, the filter between how we behave and speak in person versus how we do over social media made it clever and refreshing.

With big themes like this, it's easy to get lost. The comedy helped reacquaint the audience with the subject as well as give them space to breathe away from it. However, where the themes and story excelled, an approach to them lacked. I was often unclear on which character was speaking and to whom. The one-woman approach felt like the wrong way to feed us the eye-opening antidote her show served. Such a show deserved a full and thorough realisation and, though she did well to direct our imaginations in the right way, the execution was vague. Some more characters and some effective production design would have realised the narrative more explicitly for the audience.

One character -- with however much conviction -- trying to perform such a large show is going to find it hard to hold the attention of the audience. Without variety in what we were watching, Heartbeats overall was a little lacklustre.

Catch Heartbeats & Algorithms in the Pleasance This, just a second down the Pleasance from the Pleasance Courtyard, at 14:15 all Fringe long - https://edinburghfestival.list.co.uk/event/482627-heartbeats-and-algorithms/ 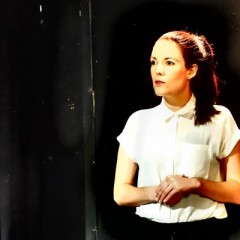 A one-woman show tells the audience a story about the implications of a world in which technology can pre-empt our decisions based on our digital fingerprint.