Voice MagReviewsLucie Pohl: Cry me a…

From the creators of "Hi Hitler", comedian Lucie Pohl brings us a new insight into her mind, interpreted in a brilliant one woman show with memorable characters.

The performance was held quite brilliantly as she portrayed different characters which varied from a lonely Italian looking for love, to Vladimir Putin's sperm looking to be free. Each scenario exposes issues in today's society, achieved while she held a one way conversation with the audience.

What really worked was her physical characterisation. With the voices and facial expression it reminded me of those characters I've seen before on the streets and on TV.

The characters themselves I found were quite comedic in a satirical way. I could say every punchline was a dark subtext about the world's problems. Each issue was exploited by the characters in a hilarious manner leaving the audience laughing.

The messages were clear. She beautifully mocks everyone and everything that basically exudes ignorance. For example: advertisement, people of different class and origins, social issues and more, No one is safe.

Cry me a liver is enjoyable. As a piece of theatre it was well thought out and punched the message into people's mind quite loudly with each character.

I found it highly entertaining. Even just for her skills to transform herself into these multiple characters I could say it's a show worth watching.

I recorded a brief interview with the star herself after viewing the show. She tells us the meaning behind the play and gives us her views on the related subjects. Hear more by clicking the link below.

Lucie Pohl: Cry me a liver is performing at the Gilded Balloon for the whole of August. Tickets and more information can be found on the Fringe Website. 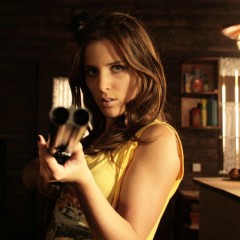 Lucie Pohl: Cry me a liver