This version of Romeo and Juliet was reimagined with a modern twist, telling the well-known story from the view of an outsider who saw it all.

Having been very familiar with this story before going into the show, I was unsure how successfully it could be 'reimagined' from a different perspective. However, my doubts were quickly put to rest when I saw how fun, interesting and interactive the show had been made, even as a one-woman performance.

The play is perfect for children, as it tells the story in a clear, easy to follow manner and includes audience participation to keep us interested. We responded eagerly and readily to the questions posed to them and helped to tell the story with their own special additions.

The whole show has been modernised to include the use of mobile phones and internet, specifically Twitter, making it easily relatable for young children. This also aided in putting another interesting twist on the show, with moments where the actress was sitting on the stage, talking on her phone, to learn the events of the play from another character. This of course also enables the one-woman show to be possible.

The use of props and costumes to aid the story were intelligent and easy to follow and I personally really liked the set and the way it helped to tell the story.

Overall, I really enjoyed this version of the play. I think it is perfect for children who don't know the story or have never seen a Shakespeare play before, but for me I think it was a little too simple, although cleverly put together and very well acted.

Suitable for ages 5 and older. 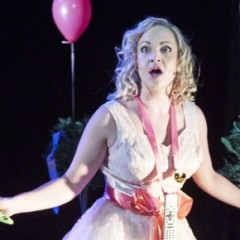 This version of Romeo and Juliet was reimagined with a modern twist, telling the well-known story from the view of an outsider who saw it all.