Hit or miss? Definitely a miss.

Alex and Jamie are a double act, previewing their show for the first time at the fringe. A miss in my opinion for a fresh act, the young lads didn't hit quite hit the nail hard enough with their jokes. You live and you learn though.

The show had a fairly good opening. It lead to talking about their pet monkey named Bradley who writes sketches for them and subliminally adds messages/signals to make them aware of how he's been treated. The double act presented us with some quick sketches with subtlety.

The humour was quite dry at times. The punch-lines weren't punchy enough to naturally laugh with. I understood the context of the sketches but the performance didn't sell it. I expected them to make me laugh, but the delivery was flat which meant the jokes didn't work.

The audience seemed to like them. There was some good audience participation, which I guess is a plus. For a fresh act previewing their show there is some potential and much room for improvement for the two lads.

Overall their performance was lacklustre. If I'm going to see a double act I expect to walk out remembering how funny they were together. To be fair, there were some good bits but it just seems like two friends on stage casually performing a few sketches.

However the use of lighting and music for each transition between scenes was pretty decent. It gave the performance more production value.

Some of the best parts were the singing, which lacked humour but was well written. They managed break the fourth wall with the audience, but certain themes and joke dragged on and made the show feel like one big sketch.

A hopeful performance by a fresh act, but more work is needed. 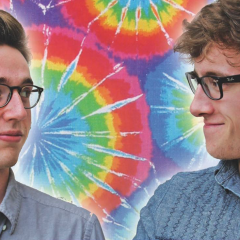 Hit or miss? Definitely a miss.