Voice MagReviewsConfessions of a Red…

An impressively executed one-woman show, following Joanie as she walks us through her day to day life, into the one event that changed it for the better.

This is an uplifting show, full of wonderful songs and various displays of acting skills by the wonder that is Rebecca Perry. To put on a one woman show, acting out various characters as well as switching between narrating the story to the audience and being a part of it, is an undeniable talent. Rebecca seemed to find it all so easy, switching between multiple accents, the genders and personality types, to create a dynamic and fun environment.

The staging was executed excellently and the lighting and sound effects made it very easy to envisage the new setting whenever the characters changed location. I liked the fact that Rebecca's costume was simple and understated, as it allowed the jungle-like set to stand out so much more, and suited every scene change accordingly.

The story was relatable and easy to follow and the occasional song broke up the constant monologue, as well as displaying Rebecca's beautiful voice. Although I didn't always find myself laughing out loud, I had a constant smile on my face throughout the show and came out feeling uplifted and happy.

I can only imagine how hard pulling off a one-woman show must be, and Rebecca definitely did it with courage and ease. I found myself forgetting that this was a one-woman show, and found that if I closed my eyes, just for a second, it sounded like there were multiple people on stage, having a normal conversation.

Overall I think the show was clever, amusing and wonderfully executed. I felt invested in the character's life by the time I left, and I would highly recommend you see it.

Confessions of a Redheaded Coffeeshop Girl is on at 6:30pm until 31st August, excluding 12th, 19th and 26th. 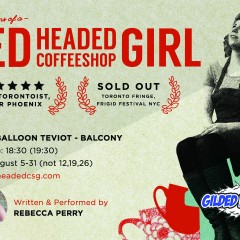 Confessions of a Redheaded Coffeeshop Girl

An impressively executed one-woman show, following Joanie as she walks us through her day to day life, into the one event that changed it for the better.