Love Radio by Ebony Ladelle is an ode to Black love and culture.

Love Radio by Ebony Ladelle is a YA romance novel. Prince Jones’s passions are music and romance. So, when his uncle offers him the opportunity to dish out relationship advice on his radio station, Prince is overjoyed. But Prince’s friends cannot help but notice that his own love life is looking a little quiet. That is until he meets Dani Ford. Unlike Prince, Dani is not a romantic. She is focused on her dream of moving to New York City to attend school and become a famous author. When the two meet, sparks fly. But Dani is not prepared to have her life plans derailed, so she gives Prince three dates to convince her that he is worth falling for.

Love Radio is a fantastic, swoon-worthy novel. Ladelle does an incredible job of capturing the chemistry between Prince and Dani in a way that does not feel cheesy but authentic and organic. It was especially heartwarming to see the sheer amount of effort they each put into planning their dates and how their dates were centred around supporting the other’s passions and dreams. For example, Prince plans a scavenger hunt in a bookstore for Dani to inspire her to write her college entrance essay, while Dani takes Prince on a tour of a local, well-established radio station to support his dream of becoming a successful radio host.

In this sense, it was also great to see how the book is more than just a love story. It is a love story to Black culture. The novel is packed full of references to Black music as a result of Prince’s passion for radio. Similarly, the novel is filled with multitudes of references to Black authors, with Dani’s coping method being to write letters to each Black author who has inspired her life. In this way, the novel stands as a joyful celebration of Black culture, love, and dreams.

It was amazing to see how Ladelle tackled some difficult yet important topics in the novel and the delicacy with which she handled them. For example, we come to learn that Dani was previously sexually assaulted at a party. Ladelle explores Dani’s trauma surrounding this event, focusing on her fear of telling others of what happened, including her friends and parents, in case she gets blamed. We learn that Prince has his own struggles as a carer for his mother, who has Multiple Sclerosis. Here Ladelle explores how this has robbed him of his ability to think and act like a teenage boy, forcing him to grow up far too early. But the standout part of the novel is how Ladelle has Prince and Dani come together and help each other heal from their traumas and overcome their struggles. The dual healing journey they went on together was beautiful to see.

Overall, Love Radio is a fantastic novel that is sure to capture a place in your heart. 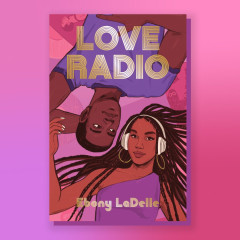 Love Radio by Ebony Ladelle is an ode to Black love and culture.