Voice MagReviewsAre You Guilty? by T…

A contemporary dance on the "bystander effect" and the rise of consumerism.

The TOB Group are a Korean contemporary dance company who use expressive physicality to comment on cultural and social moments and phenomena. They performed two shows in one at the Fringe: Are You Guilty? and Barcode.

This was about the "bystander effect", a theory that people are less likely to help someone in need if other people are also present. Three performers took to the stage with sparse props - only a table and chair. It was their physicality and sounds that told the story, as they slammed on the table, moved across the stage, and danced through scenarios to tell the story. It was evidently telling a story of perpetrators and victims, however the narrative was at times difficult to follow and repetitive. It was the second part of the show which showcased their storytelling abilities.

This performance considered consumerism, and the trend of attaching increasing value to material goods. A larger cast and larger movements accompanied this piece, with more fluid dancing, energising movements and acrobatic-style flips. The props used were far more prominent and useful, as boxes were used to represent products, and the rise of capitalistic values, with letters on them spelling out the words "barcode" and "product". Boxes were placed over people, representing how consumerism became a replacement for human connection for many during Covid. The symbolism was clever and profound, as the show ended with a comment on how capitalism is killing our humanity and sustainable ways of life, with humans dying and products surviving.

This artistic show was incredibly unique, and despite some moments of confusion in the first show, imparted an important message on its audience. 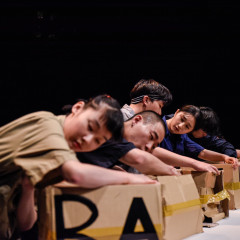 Are You Guilty? by TOB Group

A contemporary dance on the "bystander effect" and the rise of consumerism.