Even Master Yoda doesn't have a midi-chlorian count that high

It’s possible Joe Sellman-Leava created Fanboy just for me. Judging by the excitable hum in the room, I’m not the only one going through the motions. Is this what it’s like to feel seen? Audible murmurs of recognition break out as Joe unspools the VHS of his childhood, a mixtape of Noughties film franchises, from Star Wars to The Lord of the Rings. The show is an impressive one-man jukebox of impressions that tangles with its own nostalgia, reclaiming forgotten passions during a time of personal and political upheaval.

Like Joe, I’m a huge Star Wars fan. I watched them during a formative time in my life. I used to love the Phantom Menace, a film widely panned by critics on release. Somewhat controversially, Joe still holds Episode I to be one of the most enjoyable films in the series alongside the rest of the prequels. But as he grew older, he hid his passion for Jar-Jar Binks and the pod race of Boonta Eve. The toxic hate of fandom had waved its hand and said, ‘These are not the films you are looking for.’ The show is an attempt to reclaim what he loved about the prequels. And in doing so, he discovers parallels between the fantasy world and our own.

The show brilliantly captures the millennial nerdom’s coming-of-age into a time of ecological, financial, and political crisis. Fantastical worlds like Star Wars offer escapism. They tell stories of good triumphing over evil. But how does this square with the online vitriol of fans towards Jar-Jar actor Ahmed Best post-release? In 2018 Best revealed he considered committing suicide after the backlash. With the rise of the far-right, even the best line of the saga — ‘So this is how democracy dies, with thunderous applause’ — feels less ridiculous despite the terraces of alien lifeforms lining the Senate palladium.

Fanboy, through one man’s desperate attempt to cling onto his childhood, asks whether the passions of youth still have something to offer. The question is an age-old one, and Joe’s use of video playback (like Macaulay Culkin’s famous ‘Filthy Animals’ scene in Home Alone) works a treat in patching together past and future Joes. The Christmas Carol narrative trick is the second I’ve seen this fringe but it’s built into the play from the start and, well, if it ain’t broke…

When Joe first stepped out from the wings wearing a burgundy dressing gown over a men’s Superman tee, I felt like throwing my shoe at this embarrassingly dark mirror. It’s all a bit tragic. The show manages to avoid Reddit forum cringe or any self-satisfied smugness at its unbridled enthusiasm for movie trivia. Many of the show’s references can’t help but turn and wink at the camera (Joe’s uncle is called Obi, for example). It’s incredibly cheesy and it’d drive you up the wall if the script wasn’t as tightly wound as it is. I even liked Joe’s impressions of famous scenes, which have no right to be as good as they are. His Hayden Christensen is particularly bang on.

Fanboy is a great show with a standout performance, although I expect the magic is lost if you don't know the films. To Star Warsfans, I’d say the midi-chlorian count is off the charts. If that makes sense to you, then you have to see this show. 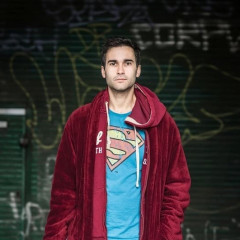 Even Master Yoda doesn't have a midi-chlorian count that high